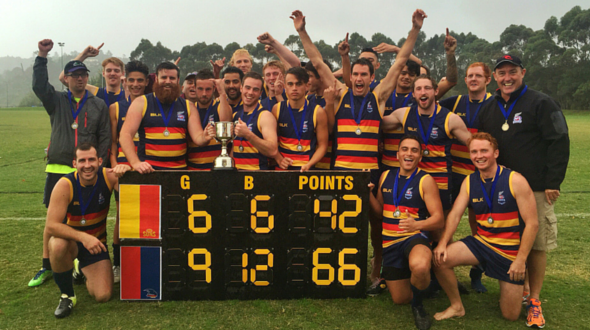 The Western Crows have been crowned Premiers of the inaugural AFLNZ Premiership.

The side, captained by Jared Court, won their last game of the season over the Northern Suns to finish on 28 points on the ladder (8 points ahead of second place, the Southern Saints). The Crows only lost two games over the course of the season with their consistent hard running and smooth ball transition, playing a big part in their victory.

The Southern Saints came into the game knowing that a win over the Central Giants would provide a sniff of the title. If the Saints were victorious and the Crows defeated by the Suns in game 2, the Premiership was theirs.

In hard conditions at QBE Stadium, the rain and wind made for tough footy but the Saints gave it their all and early goals to Justin Clark and Connor McGeough gave them the start they wanted.

Captain Michael Boyce lead from the front and was strong in defence, while midfielders Ben Hick and Sam McKenzie once again produced good links into the forward line.

With a 10-point lead at half time, the Saints wanted to finish off the season with a solid performance but come the third quarter, a motivated Giants side stepped it up to another level. Giants midfielder Sean Andrews saved his best game for last while Canterbury star Levi Inglis kicked 3 goals for his side.

The Giants continued their impressive form in the fourth quarter, piling on four goals to the Saints one and produced an upset which saw the Giants climb off the bottom of the ladder and break the Saints hearts.

A focused Western Crows side took on the unpredictable Northern Suns in the second game of the day. With the Saints losing their final game, the Crows were already champions but they wanted to finish off the season strongly.

The script couldn’t have been written any better as Crows forward Justin Gauci kicked his sides first goal after only 23 seconds on the clock. He kicked another three goals in the first quarter to give the Crows a four goal lead heading into the quarter time break.

Otago based Willem Van Der Wilt had a man of the match performance for the Suns as he worked hard throughout the game along with fellow backman Josh Copeland who continued his outstanding season.

Young Western Crows forward Joey Alesich-Tamariki, chasing the golden boot award, needed 5 goals in the final game to overtake Reyne Westbury from the Saints. His third goal in the last quarter saw him fall short but the 17 year old Tamariki has showcased himself as an outstanding prospect for the future.

A recent addition to the New Zealand Hawks, Fraser Stevens was outstanding in the backline for the Crows as they stood strong on defence. His balance with ball in hand will make him a valuable asset for the national side to take on the AFL Academy this Sunday at QBE Stadium at 1.00pm.

As they have done all season, the Crows turned up the heat on the Suns in the last quarter to run out 24 point winners and claim the AFLNZ Premiership for 2016.

Be sure to keep an eye on the website about news and information regarding the 2017 AFLNZ Premiership.