Round 5 Rising Star awarded to Will Kempt after dream debut

The AFL New Zealand Rising star award for round 5 of the 2017 Premiership has been awarded to Will Kempt from the AFLNZ Academy.

16 year old, Will Kempt from Wellington made his debut in Round 5 of the AFL New Zealand Premiership as a development player for the Central Giants. Will started the game up front and got the Giants off to a great start kicking the first goal of the game. As a development player, Kempt was positioned in defence and also spent time in the Ruck and didn’t look out of place coming up against players ten years his senior. Will has been involved with the Youth Competition and AFLNZ Academy in recent years and represented the Level 2 National AFL side in April 2016.

“At 194cm, Will is very tall for his age and progressing well. It is good to see that he can utlise his size to his advantage and kicking his first goal in his debut Premiership game. I am looking forward to seeing how he will transfer the experience of playing in the Premiership to playing against his own age group.” Mick Coultard, National Youth Manager.

We caught up with Will during the week to ask him a few questions.

I started playing soccer when I was 3 and have played ever since, I’m currently playing in the first XI at St Pats and the U17 team at Upper Hutt Football Club.

I got into AFL through my Dad who played for the Wellington Saints. I said I was interested in playing so he came back to coach the Saints, the team I’m now playing for. My younger brother Alex (13) has just started with the AFLNZ Academy and I’m looking forward to him joining the Saints also.

I enjoy AFL because it’s similar to Soccer but gives me more freedom and develops my skill in a different way. I also have really enjoyed meeting guys from all over NZ through the the academy and  have made some great mates.

My biggest on field advantages would probably be my height, a good solid left foot and my ability to read a game which comes from my Soccer background. 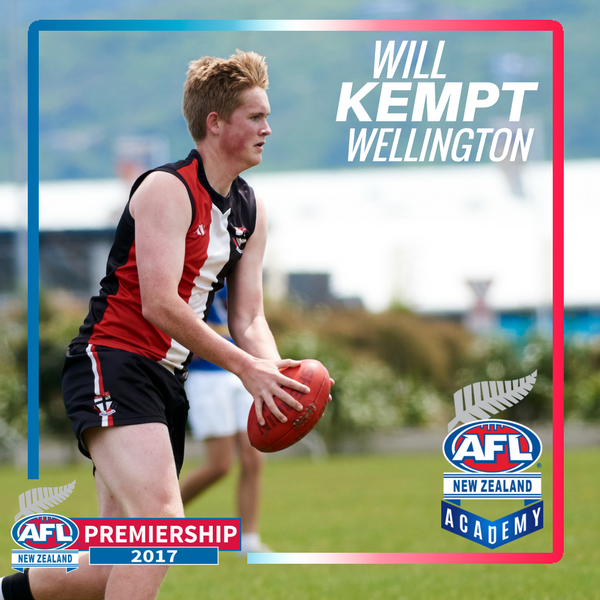