The 2017 AFL New Zealand Youth competition moved into week 5 on Sunday where the future NZ stars skills were on display in both Auckland and Wellington.

Aiden Christians was named player of the day for the second week in a row as the Saints recorded a six goal victory over the Lions in the Wellington competition. Christians was named alongside Rico Tuhua who’s development is coming along nicely. Special mentions go to Doug McJorrow, who slotted four goals for the Saints and Lewis Gill who was accurate in front of goal kicking three goals for the opposition. For the Lions, young Will Roff is enjoying his footy and was named player of the day with midfielder Cameron Kerr.

In Auckland, Maia Sciarone and Nino Changiz were the players of the day as they guided the Magpies to a five goal victory over the Tigers. Bree Groube and Aaron McCrum were named best for the Tigers after an outstanding game by both players.

In the U17’s, the Crows managed to kick seven goals straight but it wasn’t enough to claim the win over the Saints as they won the game by 51 points. New Zealand representative and Crows player of the day Luke Williams was back to his best, while fellow NZ team mate James Dakin showed his class and claimed the best on ground award for the Saints. 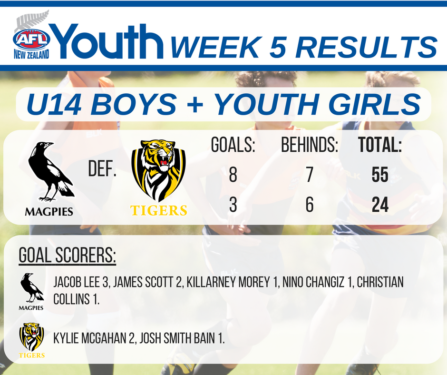 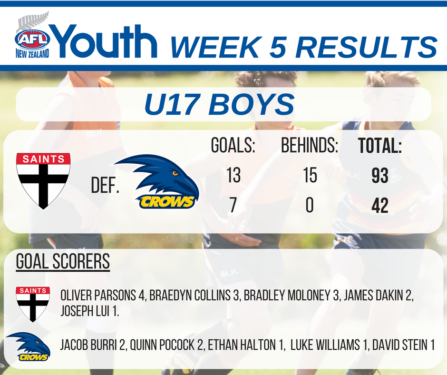 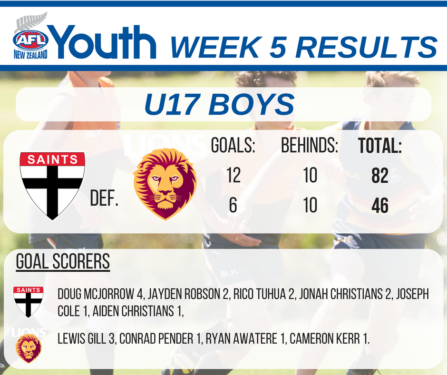 Lions: Will Roff and Cameron Kerr