Youth Competition rolls into Round 6

It was Round six of the Youth competition this weekend and the next wave of up and coming AFL New Zealand stars were in action in Auckland and Wellington.

Both The U14 Boys and Youth Girls combined this week to mix up the teams to learn from each other and further develop their skills. The Magpies took out the game this week by eight goals as James Scott and Abigail Cotton were awarded best on ground. For the Tigers, Maia Sciarone has been developing well to be awarded the best, along with Ryan Awatere, who is part of the Wellington Youth Competition but was in Auckland for the weekend to watch his brother Alex play for the New Zealand U18’s.

Notable mentions go to Spencer Jones from the Tigers for his decision making, Nino Changiz (great team play) and Josh Heijn for his terrific goal.

It was the Crows this week who took out the U17 competition as they beat the Saints by 13 points at QBE Stadium. Levi Boyd was named best on ground for his second and third efforts plus a goal to boot. As for the Saints, Stuart Tunley’s hard work all game earnt him the best on ground award.

Notable mentions go to Ethan Halton (Crows) and Tipene Ball (Saints) for their strong marking ability in the air.

It was a big win for the Lions over the Saints in the U17 Wellington competition. The Lions were kicking with a strong breeze got away to a flyer in the first quarter kicking nine goals to one. Hari Below, William Anderson and Doug McJorrow were generating lots of run for Lions giving Issac Hilliam and Lewis Gill plenty of opportunities up forward. Joseph Cole showed some promising signs with good work in the ruck and Jonah Christians and George Hopkins worked hard all day. 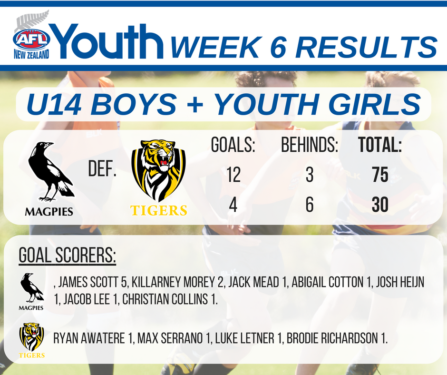 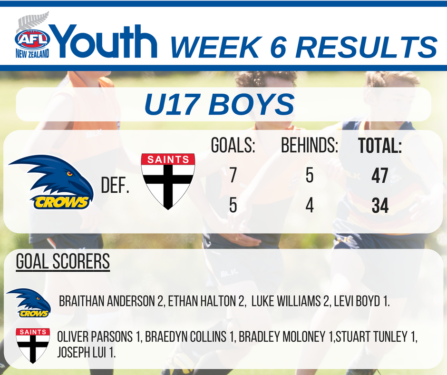 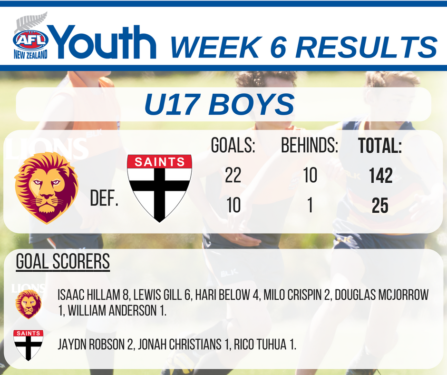