Silky skills on display in week 7 of the Youth competition.

Round 7 of the 2017 AFL New Zealand Youth Competition wrapped up in Auckland and Wellington this weekend and with only one round to go, all the players have developed their skills and game knowledge over the past seven weeks.

The Auckland Youth competition was played prior to the 2017 NPC on Saturday and in the U14’s and Youth Girls competition, it was the Tigers that took the honours with a 39 point victory over the Magpies. Tigers player of the day Spencer Jones was terrific in the forward line, taking strong marks and finishing the game with three goals. For the Magpies, Felix Clark was awarded the player of the day after he demonstrated some great skills and focused on what the teams were looking to develop in the game.

It was a big margin in favour over the Crows in the U17’s as they kicked 20 goals to seal a big win over the Saints. Crows Forward Ethan Halton, who has been fantastic all year kicked 10 goals and Crows player of the day Quinn Pocock bagged 5 goals. Stuart Tunley continues to impress in this year’s Youth competition as he was once again awarded the player of the day for the Saints.

A close game in Wellington however the Lions were able to convert their forward entries better. Rico Tuhua and Jonah Christians worked hard and set up a number of plays for the Saints with George Hopkins and Jonathan Anderson rebounding well from defence. For the Lions Douglas McJorrow found a lot of the ball and kept the Lions moving forward with Issac Hilliam, Sydney Gill and Lewis Gill providing lots of forward options. Despite the wind the game saw a lot of marks taken as the players skills continue to develop. 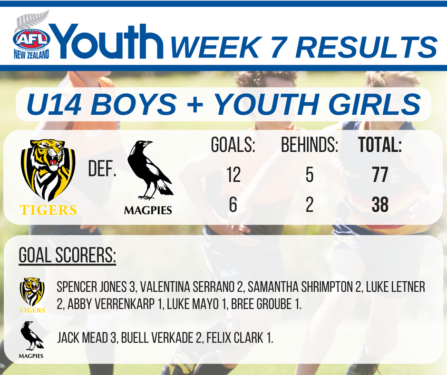 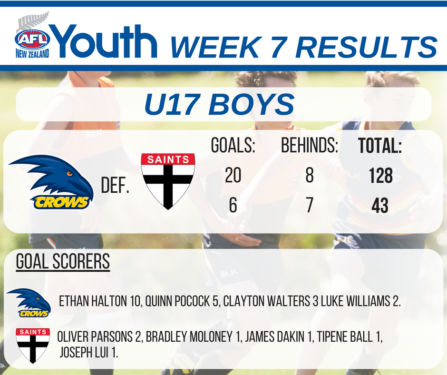 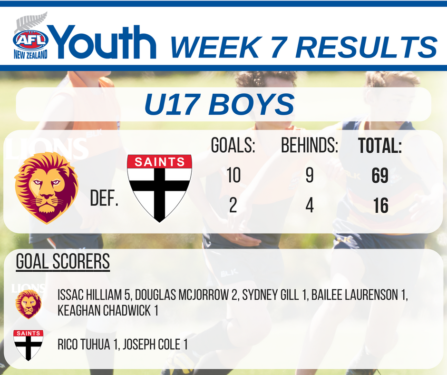