U18 Falcon’s gallant in defeat against Hallam

The U18 New Zealand Falcons have shown positive signs during their first game of their 2019 Melbourne tour going down by 26 points against a top notch side from Hallam College this evening.

Played at BlueScope Oval in Hastings on the Mornington Peninsula, a healthy crowd attended the game with spectators witnessing a very vocal Haka for the first time.

New Zealand heaped on the pressure from the first bounce as they looked implement the structures they had worked in the lead up to the campaign.

Beren Goodwin got the Falcons off to the perfect start picking up a loose ball and slotting our first goal 2 minutes into the game.

GOAL! There’s our first goal from Beren Goodwin picking up a loose ball inside our forward 50 and bending it home.#Greatstart #GoFalcons

They kept the pressure on with multiple inside 50’s and had their second goal a few minutes later through Tom Turner from Canterbury.

Hallam composed themselves and got back into the game taking a slender lead into the first break.

For the majority of the second quarter, Hallam asserted their dominance on the match kicking 7 unanswered goals.

The Falcons stayed positive and stuck to their game plan and some good work from Luke Williams and Will Kempt saw them get the ball inside their own 50 where debutant Jarrod Hill kicked his first goal for New Zealand.

A centre clearance from the restart saw NZ on the attack again and Tom Turner took the game on and kicked his second goal just before the main break.

Down by 6 goals at halftime, the Falcons showed what they can do as they produced some scintillating football to kick the next 3 goals in a row.

GOAL! The Falcons are flying as Jarrod Hill kicks his third goal for the game and we have all the momentum. 5 min left in the quarter.#GoFalcons pic.twitter.com/atqJfJGZNK

Captain Sam Cairns was leading the way in the middle of the ground getting his hands on alot of the footy and was well supported by Jevaan Croft and Doug McJorrow.

Tall forward Daniel Howie was awarded a free kick right on the siren and when he kicked true, the Falcons found themselves trailing by only 3 goals heading into the last quarter.

Best on ground Jonah Christians topped off a solid performance with a stunning goal at the start of the final term to get the Falcons within 2 goals but Hallam fought back strong.

Hallam College kicked a couple of late goals to blow the margin out to 26 points but the Falcons proved that they are no easy beats winning the second half of the match.

The squad now turns it’s attention to Friday night’s game against MPJFL Interleague side. The Falcons were victorious in this game in 2018 and will be looking to repeat their feats achieved 12 months ago.

Kick off is at 6.00pm (AEST)/8.00pm (NZT) and play by play updates will be on the AFLNZ Twitter page along with quarter updates on Facebook and Instagram. 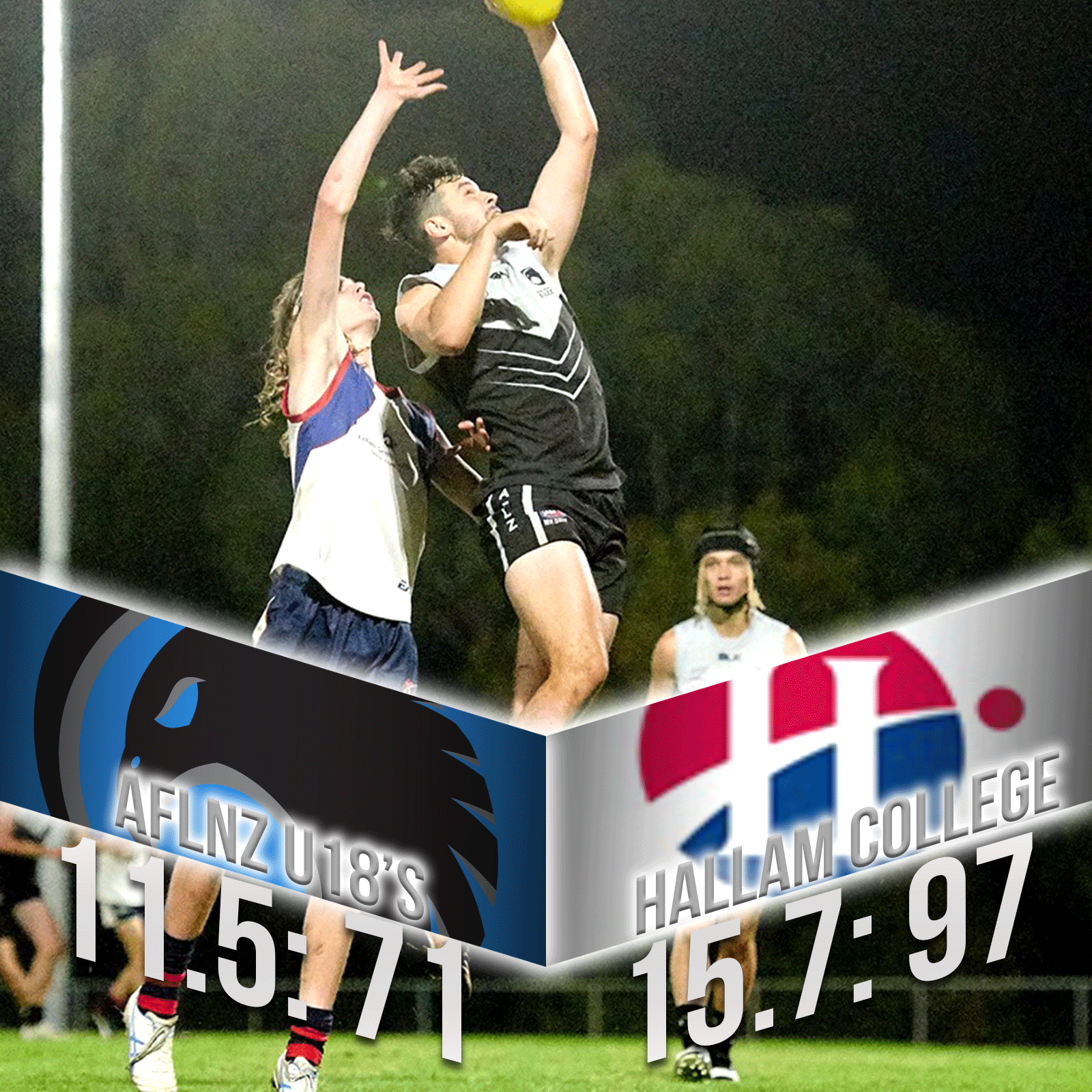