The Manurewa Raiders have won their first game of the season as they defeated the Howick Hornets by 9 points over the weekend.

The Waitakere Magpies defeated the Uni Blues in a thriller at Parrs Park and the North Shore Tigers won a bruising battle against the Mt Roskill Saints to once again go back to the top of the ladder.

The North Shore Tigers have slingshot themselves back to the top of the Auckland AFL ladder after they defeated the Mt Roskill Saints at Onepoto Domain.

It was a great battle of footy with both sides coming out firing with excellent skills and precision in the opening quarter.

The Tigers welcomed back tall forward Mitchell Ryan and his battle with Alastair Maisey was a highlight all game with neither player willing to give anything uncontested away.

Mount Roskill were unlucky not to score with a couple of goals bouncing just short at the back end of the first term.

The game opened up in the second term as both sides played some running footy with plenty of opportunities down the flank and into each others forward 50s. Will Dickinson and Tristan Burnett were running hot for the Saints and worked in well with Kirk Murray.

Justin Du Toit and Morgan Huggins combined fantastically in the third term for the Tigers as they opened up space in the forward line and managed to capitalise on some scoring opportunities.

In the fourth quarter the Tigers ran away with the game as Tom Hayhoe created great run off the backline to set up multiple scoring shots. The Tigers kicked 4 goals to secure the victory on home soil.

“We were looking at backing up a good performance from the previous game against Mt Roskill and also to work on learnings from the loss to University last week. As a group, we ticked some boxes and still have work to do. The team is building and going in the right direction, Great defensive effort shown today, with some hard, gritty, no back step footy.” Tigers Coach, Sean Mayes.

“Disappointed to be coming back over the bridge with a loss, but well deserved by the Tigers. We’ll look to keep improving and get ourselves right for finals.” Saints Vice President, Will Morris.

The Waitakere Magpies are on a roll after knocking off the reigning Premiers and winning their third straight game.

It was tight in the first half as both sides were hungry for the ball. Zac King started well for the Magpies and showed good intensity around the contest.

Auckland AFL stalwart Mick Coultard wound back the clock as he kicked 4 goals for the game in an impressive display.

The Uni Blues kicked 3 goals to 1 in the third term and went into the final break leading by a goal.

The Magpies produced a strong final quarter as the three big forwards, Dylan Bennet, Drew Bridge and Dan McGregor all kicked a goal each to secure the 10 point win.

The Magpies made it a double on the day with the Norwest Magpies also winning their Auckland Women’s match against the Central Eastern Blues.

“For the first time this year we were ready from the first quarter and all players put their best foot forward all day long. It was a game played in great spirits, hard football, strong contests and all under sunny skies. It was a pleasure to share our old boys day with Uni. Regardless of whom is on the winning side, games like today are a fantastic advertisement of our game and I thank Uni players and support staff for their efforts.” Magpies Coach, Steve Howard.

The Manurewa Raiders have made history as they defeated the Howick Hornets for the first time in the clubs history.

In a tight match, the Raiders held their nerve to cling on to a 9 point win.

It was a whole team effort by the Raiders but standouts on the day were Ahku King and Ronan Morling. The young talented Raiders stars continue to develop in the game of AFL and are starting to make more of an impact around the ground.

Up forward, Alex Fakatoumafi put in a huge effort while speedster Isaac Piper was pivotal around the ground.

The Raiders now host the North Shore Tigers and will be confident of an upset next Sunday. 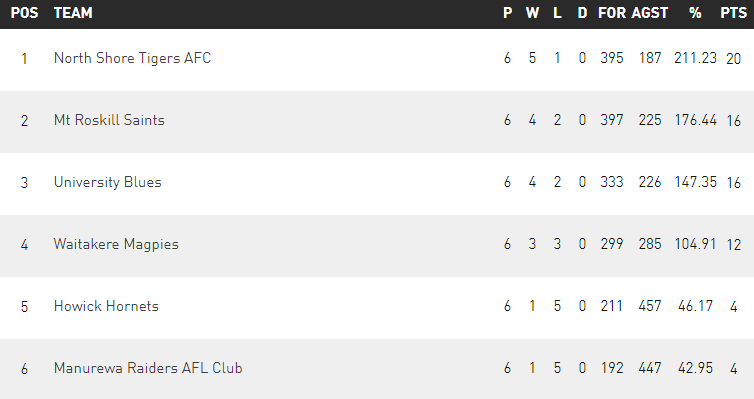