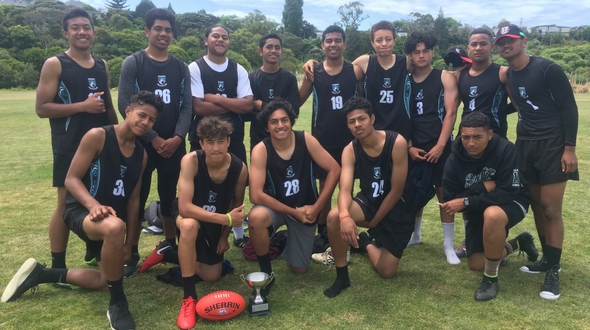 The 2017 AVJennings AFL Junior AFL Cup took place during the week where the best Secondary Schools in Auckland and Christchurch battled it out to become North and South Island Champions.

The championships follow the AFL Cup regional cluster tournaments that took place over the past 2 weeks in Auckland and Christchurch.

Proving ever popular each year, a number of students participating in the championships look to remain playing the sport and start their pathway by joining the AFL New Zealand Youth competition.

Southern Cross Campus are the North Island Champions after going through the tournament at Onepoto Domain unbeaten. Whangarei Boys made the trip down to Auckland ended the competition with three wins for the day and star player Dylan Hook picking up player of the Tournament.

Rutherford College, Northcote College and Albany Junior High School were equal third finishing the day with one win each.

Jeff Silby (Teacher in charge and coach of the AFL New Zealand Academy).

Congratulations to St Thomas of Canterbury College on winning the 2017 AFL Cup South Island Championships after an impressive performance over Papanui High School.