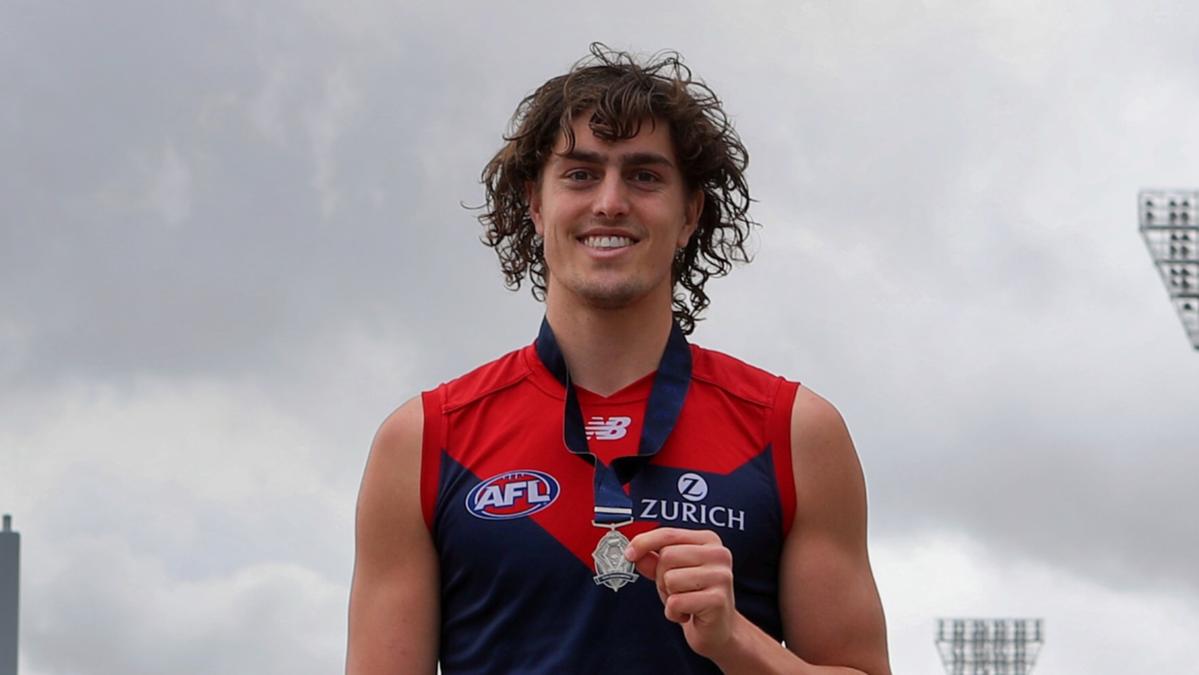 Melbourne’s Luke Jackson has been named as the 2021 NAB AFL Rising Star.

WHEN Melbourne held pick No.3 at the 2019 NAB AFL Draft, the Demons fielded call after call from rivals trying to nab the selection in a trade deal. But the Demons weren’t budging, absolutely set on drafting West Australian youngster Luke Jackson.

And that call from Demons recruiting boss Jason Taylor has been vindicated again on Thursday, with Jackson named the winner of this year’s NAB AFL Rising Star, becoming the third Demon to achieve the feat after Jared Rivers in 2004 and Jesse Hogan in 2015.

Jackson was nominated for the honour in round seven and was one of four Demons to get the weekly nod this season, alongside James Jordon (round eight), Trent Rivers (round 11) and Jake Bowey (round 22).

But he has been crowned the Ron Evans medallist after playing a key role in Melbourne’s ascent up the ladder, playing 21 games in the home and away season and booting 15 goals as a key forward/ruckman.

“It’s a massive honour and I am very humbled to win the NAB Rising Star award. I am really excited about what the team can achieve in the finals series and can’t wait to get out on the field and make our supporters proud,” Jackson said.

“I couldn’t have had the season I have without the support of Simon Goodwin, the entire coaching group and all my teammates who have helped to not only develop me as a person but also as a player.

“My family have also played a massive role throughout the and I would like to thank them for all their support and guidance they have given me.”

He claimed the Rising Star after being given the full five votes from nine of the 11 judges, to finish with 51 votes, with Brisbane premiership player Chris Johnson (two votes) and Sydney great Jude Bolton (four votes) the only members of the panel to not rank Jackson as the best this season.

Rivers, Jordon, Essendon’s Nik Cox, Western Bulldogs’ Cody Weightman, Adelaide’s Harry Schoenberg and Fremantle’s Hayden Young were others to poll behind Jackson, who became the first ruckman to claim the award since Sydney’s Adam Goodes in 1999.

Melbourne coach Simon Goodwin said Jackson should be proud of his outstanding season.

“To see the way Luke has developed over the last 18 months has been a great highlight for me, and it’s a credit to the environment and culture we have built at the football club to give our players the best chance to succeed,” Goodwin said.

“Luke is an outstanding person who has great values and is a very popular member of the playing group. This award is fantastic recognition for Luke and all the hard work he has put into performing at a high level on a consistent basis.”

The East Fremantle product gave away a promising basketball career to concentrate on football in his draft year after being wooed by the AFL and played six games last season in his debut year.

He shapes as a crucial figure in Melbourne’s bid to break its long premiership drought since 1964, with Jackson’s most dominant game of the season coming against Gold Coast in round 20 when he kicked four goals from 17 disposals.