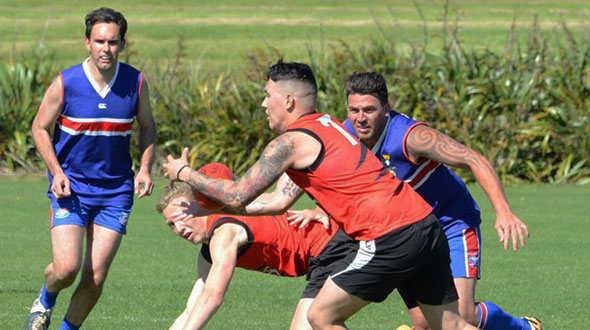 The Eastern Blues have taken the Canterbury AFL title, winning a tough contest against the Christchurch Bulldogs.

Heading into the Canterbury AFL Grand Final, neither team could claim to be outright favourites, having both won matches against each other during the regular season, with the Bulldogs claiming the Minor Premiership. They started early in the first quarter, kicking the first goal. However the Blues hit back hard, with 5 unanswered goals, taking advantage of loose tagging from the Bulldogs backs and ruthlessly converting opportunities. The Blues led by 16 at the first break.

The contest evened up on the field in the 2nd quarter, however the Blues continued to pull away on the scoreboard. 3 goals apiece were kicked, with the Blues taking a 20 point lead into half time. The eventual Man of the Match, James Bowden, managed to soak up much of the pressure being exerted by the Bulldogs and keep his team in the lead.

The Bulldogs continued to fight hard in the third quarter, opening the scoring. However, the Blues managed to keep lifting their game regardless of what was thrown at them. The heroes for the Blues were the midfield, who played with superior stamina, pace and pushed forward to kick goals when needed. The Blues also excelled at moving the ball out of their defensive area, particularly from kickouts. The squad depth of the Blues also came to the fore, with a wider range of players that could be called upon at key moments. However, going into the final quarter, the Bulldogs were still within range of taking back the lead.

The Blues came into the final quarter determined to secure the Premiership, and they kicked the first goal to extend their lead. The Bulldogs’ van Gruting and Woodward began to fade, after shouldering a huge workload over the first three quarters, and Toomer, Benny, Inglis and Pluck capitalised for the Blues. While the Bulldogs continued to fight until the final whistle, the game was put beyond doubt with a late run of goals. The final score was a 14.8:92 – 9.5:59.

Congratulations to Justin Davies and Jared Court, coach and captain of the Blues. Along with that, Stephen van Gruting was awarded the CAFL Best and Fairest award for 2014. The man of the match, as voted by the umpires, was James Bowden.

The two teams in the finals will likely supply large contingents of players to the NPC team that will travel to Wellington in December. The Canterbury Cobras have traditionally been one of the strongest provinces, and last year placed 2nd. Their match against current Champions Auckland will be the final game of the tournament, and may well decide who takes home the trophy for 2014.

The final positions of the Auckland AFL regular season are taking shape, after a round in which University, Waitakere and the North Shore Tigers secured their positions as the top 3. However, the Minor Premiership is still in play with one round left.

In one of the closest matches of the season, the Waitakere Magpies managed to come from behind to beat the Mt Roskill Saints. The Magpies fought hard after being 3 goals down at half time. A huge 3rd quarter put the Magpies in front, and they managed to grimly hang on until the final whistle. For the Saints, the performance was a sign that they could still be a significant force in the playoffs, with strong performances to Miller, Hollingsworth and Dickenson. The other highlight of the match for the Saints was the performance of James McKenzie, who kicked 4 goals in his best performance since returning from injury.

The University Blues took another big step towards a Minor Premiership, with a big win over the Pakuranga Panthers. The Panthers put in a big 1st half to stay in touch with the Blues, but over the 2nd half fell away against a very strong University outfit.

In the final match of the round, the North Shore Tigers completely demolished the Manurewa Raiders. The Tigers had strong performances coming in every area of the field, with the midfield controlling possession, the forwards pounding goals through, and the backs managing to maintain a clean sheet in two quarters. Keegan McCauley earned plaudits for a breakout game, with the large spread of contributions suggesting the Tigers are peaking at the right end of the season.

Manurewa and Pakuranga will be playing off at Bell Park at 2.00, with both teams looking to avoid the wooden spoon for the season.

The University Blues are one solid win away from a Minor Premiership, but will have to beat the 4th placed Mt Roskill Saints to do so in their match at May Road.

The big match of the round will be between the Waitakere Magpies and the North Shore Tigers, to be held at Onepoto Domain at 2.00pm. A win to either team will see them secure either 1st or 2nd on the ladder, with the loser certain to finish third. 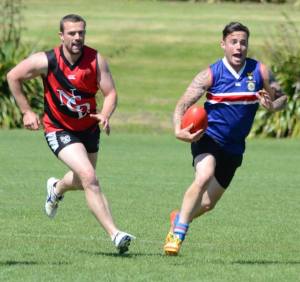 The Wellington AFL matches saw the Bulldogs continue their steady march towards the finals with a huge win over the North City Demons. The Demons were fielding a younger team, with some of their big hitters unavailable, and while they worked hard, were unable to match a powerful Bulldogs outfit. The defensive pressure applied by the Bulldogs was relentless, and their goalkicking accurate. Peter Halstead was declared Best on Ground for the Bulldogs, with Sam Green earning the nomination for the Demons.

The other match of the round was much closer, with the Wellington City Saints picking up their first win of the season, against the Hutt Valley Eagles. Hayden Mourits led from the front for the Saints, earning a Best on Ground and kicking a phenomenal 7 goals. The speed and distribution accuracy of the Saints saw them through against a team that were better than the scoreboard suggested. A remarkable final quarter saw the Eagles pull back 5 goals, but it was not enough to give them the win.

In other news from Wellington, a set of women have began AFL training sessions with local coach Shannon Wall, with coaching sessions running in conjunction with WAFL matches. This exciting development mirrors the growth across New Zealand of female AFL. Hopes are high that within a reasonable timeframe an Open Grade competition for women can begin, providing a pathway for Senior Female New Zealand representation.

Finally, Eastern Bulldogs stalwart and Wellington AFL President James Terry celebrated his 50th game for his club, with goals and a win.