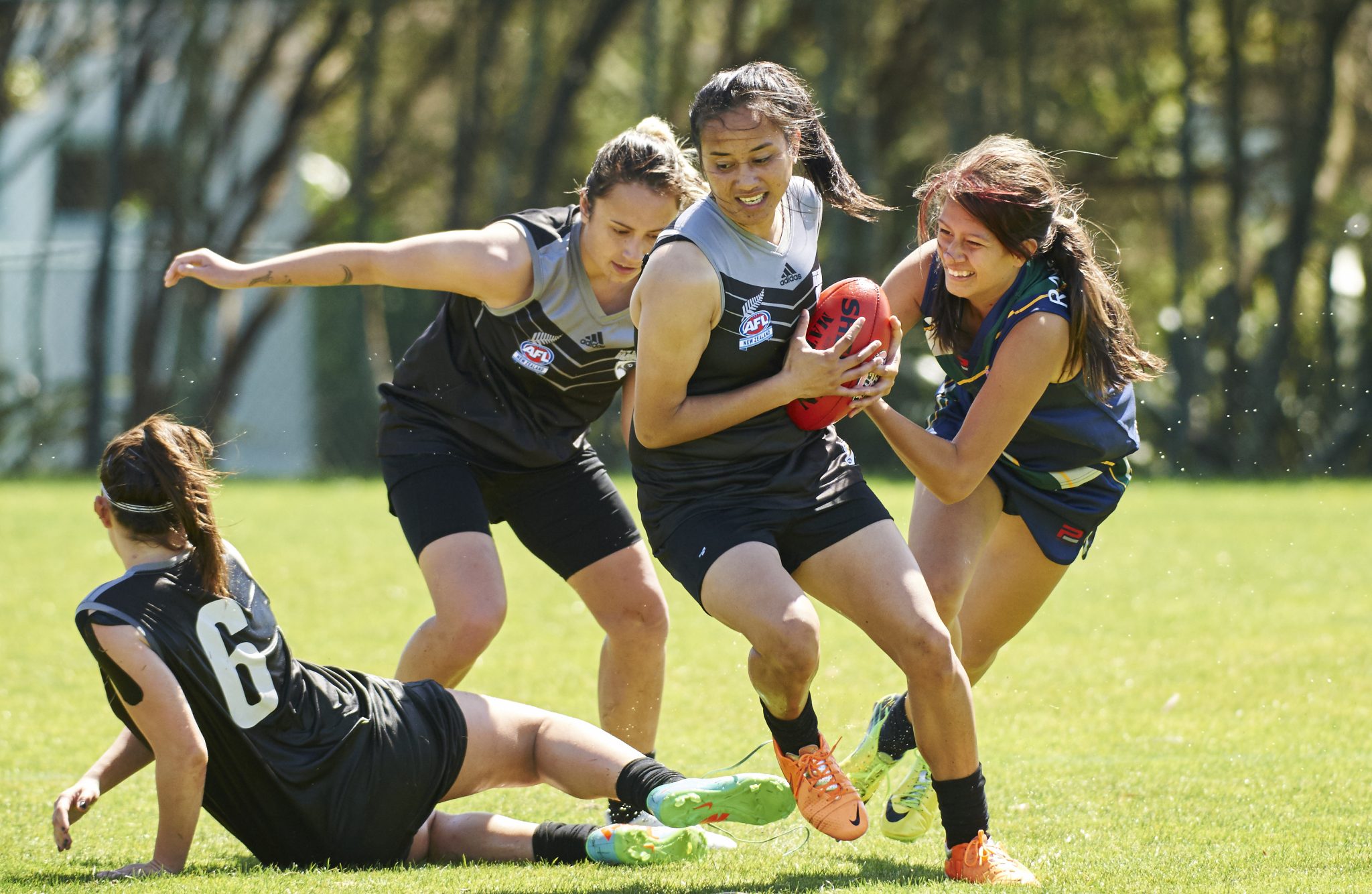 The Australian Breeze and U18 New Zealand Kahus have wrapped up their series with another win to the Breeze, but plaudits and celebrations of the contributions of all players across the matches.

It was another match of improvements for the U18 New Zealand Kahus, particularly in terms of game understanding and ball distribution. The match also saw the Kahus kick a goal, through a combination of persistence, skill and teamwork.

The performance of the Kahus was lauded by Head Coach Lisa Roper.

“I thought our girls started to think like footballers. Not only that you played with pure sportsmanship, pure respect, and still went hard at the contest.”

The pride in all of the players was evident in the words of Australian Breeze Assistant Coach Natasha Bennett, who echoed Lisa’s words regarding the Kahus, and described the high esteem she held her own players in.

“You embody leadership, you embody persistence and growth. You are inspiring.”

The match itself was played in harsh conditions, with gale force winds coming off the Waitakere ranges and periodic bursts of rain.

Once again, the physicality and commitment at the loose ball was evident in the Kahus’ performance, with captain Hope Schuster leading the charge, making crunching tackles. Her opposite number Katherine Smith was another standout in this area, with tough tackling and clever shepherding.

For periods of the match the Kahus were able to play at the right end of the field, at other times they were overcome by the superior skill and structure of the Breeze. Lily Mithen and Rachel Ortlepp led the scoring, with Ortlepp knocking in a hattrick of goals in the 3rd quarter.

The Kahus goal started with a run from Hope Schuster, followed by a kick into space for Aleisha Taylor to run onto. Taylor slipped past her tagger, and put the ball onto the boot for Tayla Cross, who marked safely. Tayla’s set shot used the wind perfectly, with the ball curving round the corner of the post into the goal.

Dayna Harris, who was a non-playing member in the 2013 squad, showed promising signs of development, winning a Best on Ground award after making a solid contribution in the first match.

With the series completed, the Australian Breeze will return home, where they will go on to leadership and development programmes to help build and grow Female AFL. The qualities required for such an undertaking were on full display in New Zealand, with the Breeze taking every opportunity to encourage, inspire and educate their fellow players from New Zealand.

For the Kahus, their next major event will be the Junior Hawks Cup competition, in which the Kahus will have the opportunity to play for or coach a school representative team. With the squad coming from many different schools, it is likely some teammates will find themselves facing off against each other.