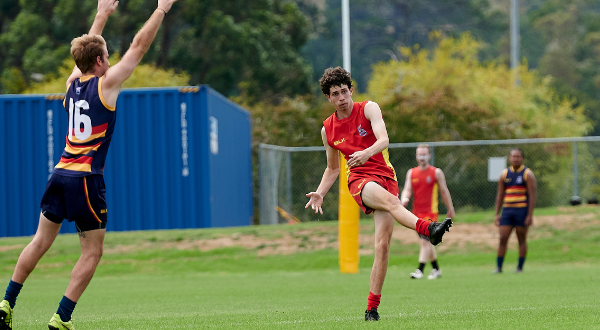 Oliver is playing in his first season of the Premiership and is making a name for himself.

After a consistent first season, Oliver had a breakout game in the final round robin game against the Southern Saints. Giamblanco had multiple touches of the footy and created a number of opportunities for the Premiership side.

As Oliver continues to develop his game, he will grow into an all round player.

“ It was my absolute pleasure to have everything I have worked closely with Oliver bring to fruition Sunday against the Southern Saints. Being the true linkage player in a series of give and goes and stoppage clearance around the ground, it was truly inspiring to see the way Ollie played the way he did.” Adem Manderovic Head Coach.

AFL New Zealand spoke to Oliver and asked him a couple of questions during the week.

What sport did you play growing up?

I am looking to continue to develop my game and hopefully one day, I can represent the Falcons

My spatial awareness. Coming from a football background, I know how to create space for myself to get the ball