Nominees for 2019 AFL New Zealand Coach of the Year 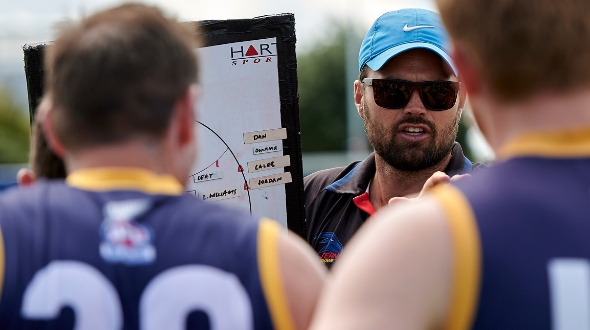 The winner will be announced at the 2019 High Performance Awards which will be held on Saturday the 6th of April at AUT University in Auckland City.

To purchase tickets, click the link below. Spaces are limited so get in quick.

Aucklander Chris Mundell is the current Head Coach of the New Zealand Falcons after spending 3 years in an assistant role under Rob Malone.

Wellington’s Gregor Kempt has been involved as a coach in the Youth Competition and the AFL New Zealand Academy over the past 12 months and has been a strong leader in helping young athletes develop in the region.

It has been a big year for Cantabrian Izaak Williams.

In his debut season as head coach in the AFL New Zealand Premiership, Williams guided the Central Giants to their first title as they only dropped one game throughout the season.

In April, Williams was at the helm of the U18 side which created history by winning their first ever game on Australian soil as they defeated a highly talented Mornington Peninsula Interleague side.

Mick Coultard has a long history with development of AFL in New Zealand.

The inaugural head coach of the New Zealand Kahu returned to the role in December as the Kahu made it five wins in a row defeating the Port Adelaide Women’s Aboriginal Academy at QBE Stadium in Auckland.

Mitch Ryan has progressed nicely in the coaching ranks over the last couple of years..

The 25 year old was the first ever coach of a New Zealand team to win a series over a touring Australian side when the AFL New Zealand Youth Girls defeated the Mornington Peninsula Youth Girls over the 2017 ANZAC weekend and backed up that win with another Kahu series victory in April 2018.

To purchase tickets, click the link below. Spaces are limited so get in quick.