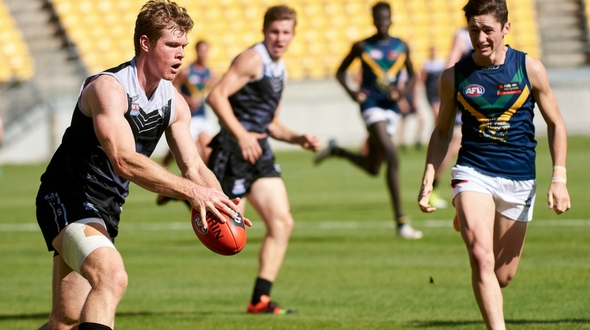 The NAB AFL Academy have won the annual ANZAC clash against the AFL New Zealand Hawks by 106 points at Westpac Stadium on Monday the 24th of April.

The Hawks were Captained by Andrew Howison for the game and welcomed Brownlow medallist and Brisbane Lions champion Simon Black to the side where he made his debut for his country of heritage.

The 38-year-old former midfielder showed he can still find the ball throughout the game against the next generation of AFL stars.

Fellow debutant Mykelti Lefau, who plays for the Casey Demons in the VFL also had a game to remember. The 18 year old, who was born in Auckland only took up AFL four years ago and showed that he is a star in the making with his ferocious attack on the footy along with his solid defence.

Experienced Hawks Ruckman Ty Smith showed his class for the second year in a row as he stood up against his quality opponent to contest at the stoppages. If he keeps his form over the next few months, he will be a key figure for the Hawks in the 2017 International Cup in August.

Exciting young AFL prospect Nick Blakey was brilliant early on in the game, kicking four goals for the Academy side.

AFL Academy midfielder Sam Walsh was excellent in the win, impressing with his footy instincts and sharp disposal, while Ian Hill also excited with four goals. Hill is a relative of Fremantle brothers Stephen and Bradley.

Rhylee West was another of the 2018 prospects to shine in the contest, more than a year before he is eligible to join the Bulldogs under the father-son rule. His father Scott is a seven-time best and fairest winner for the club.

The Hawks saw this game as part of a seven match campaign in the lead up to the International Cup in August and although they were beaten on the scoreboard, the Hawks worked hard on their structure they want to implement for the upcoming tournament.

Recruiters from AFL clubs made the trip over to New Zealand to cover the annual five-day camp. The players from the Academy Squad rounded out the trip by attending the ANZAC Day service on Tuesday morning before making the trip back to Australia.