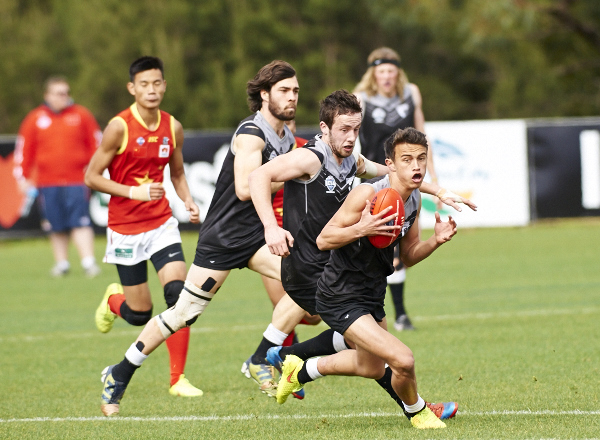 The New Zealand Hawks have thumped the Chinese Dragons to notch their 2nd win of the AFL International Cup.

With a score of 28.26:194 – 0.0:0, this was another outstanding defensive performance from New Zealand, and was in many ways an improvement on their performance against Sweden.

Blogger Anthony Morgan described the Hawks as “too big, too strong… found a high percentage of their targets, good kicking accuracy.”

A remarkable aspect of the match was the nine goals kicked by Tim Morton, who was clearly looking to make a mark on the game after missing the first match of the tournament.

The game was also a strong one for St Kilda International Scholarship holder Joe Baker-Thomas, who kicked two goals on his home turf. The match was played at St Kilda’s Linen House Centre in Seaford.

A much sterner challenge awaits the New Zealand Hawks in their next match against the USA, with the USA Eagles coming off a hard fought win over Canada.

That match will be streamed by the Eastern Football League, with commentary provided by Radio Eastern. Tune in at 2.30pm NZT on Saturday.