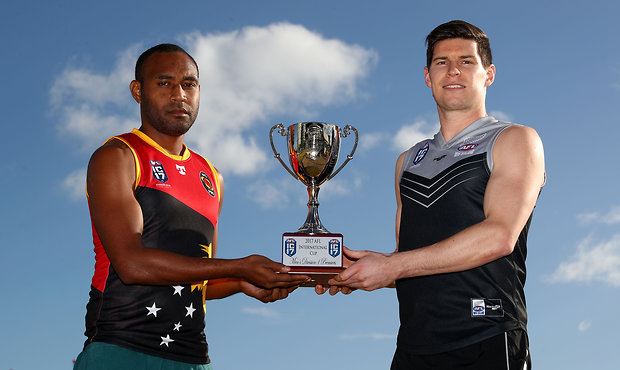 Football’s greatest stage will host Papua New Guinea and New Zealand today to determine which nation can claim to be the best team outside Australia by winning the AFL International Cup Grand Final.

After two weeks and four rounds of footy, New Zealand and Papua New Guinea – perennial contenders in past International Cup carnivals – will go head to head in the men’s division one decider at the MCG in a curtain-raiser to the Collingwood vs Geelong match.

In a curious twist of fate, New Zealand kicked a goal on the siren against Ireland in round four action at Melbourne’s Royal Park on Tuesday, denying the Irish a spot in the Grand Final while opening the door for PNG.

“The game against Ireland was easily our toughest test,” said NZ skipper Andrew Howison. “It was pretty nerve-wracking and we’re only just getting over it.”

PNG captain John James Lavai knows all about nerves, as he led his team to victory in the 2014 AFL International Cup Grand Final against Ireland despite carrying a debilitating hamstring injury. He is looking forward to another shot with full fitness.

“It will be great for PNG to watch the final – especially the boys we had to leave at home. We hope AFL clubs will start to look at our talented young players.”

Lavai will play alongside his brother, Max, while his sister, Tavia, who is in Melbourne playing for the PNG Flames, will be watching.

The Kiwis are taking inspiration from Melbourne ruckman Max Gawn. “Max is a big supporter of New Zealand footy and he visited us ahead of our game against Ireland,” said Howison.

“He really got around the boys and we’re hoping he’ll be there on Saturday.”

The two nations will have an opportunity to take a good look at each other as they exchange war dances before the first bounce. But they have not faced off since a semi-final in 2014.

“The message for us will be to continue playing our brand of football and to be confident in our ability and the preparation we have put in.

“It will be a tough battle against a side that seems to be hitting its straps at the right time.”

“New Zealand has a lot of big players,” said Lavai. “So, we know we have to rely on our speed.”