Record number of Schools turn out for Wellington KiwiKick Tournaments 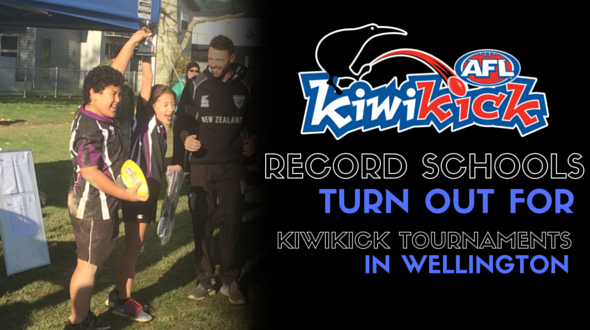 A record number of Primary Schools across the Wellington region have turned out to participate in three separate AFL KiwiKick tournaments.

With 7 teams from 4 schools, Kelson Primary was the only School to have the AFL KiwiKick programme, it was great to see a large number of students playing the game for the first time. The improvement and development of skills and game play was enormous over the tournament and all the students enjoyed the fact that they got to learn some new skills.

With the extra knowledge of having AFL KiwiKick coaches come into their School, Kelson Primary were hard to beat and came out as tournament champions on the day.

AFL New Zealand would like to say a big thank you to everyone involved for helping get the tournament off the ground and all the teachers in charge who organised the teams to participate on the day.

The Upper Valley Cluster Tournament was into its third year 3rd year, and this was the biggest tournament yet.

14 teams from 10 schools attended the day at Trentham Memorial Park with 9 of the schools having had the AFL KiwiKick programme in their school in the last 2 years.

Over 170 kids participated in the tournament and the standard was high right from the start of the day with kicking and marking impressive from all sides.

20 Upper Hutt College Students who have completed the AFL Secondary Schools ‘Coach the Coaches Programme’ were on hand to assist with the tournament. They assisted with:

St Joseph’s Upper Hutt and Fraser Crescent were the past winners and showed their experience early on. Silverstream impressed in their first appearance in the tournament, drawing with Fraser Crescent in their round games.

AFL New Zealand would like to Thank David King from Activation for his help in the organisation of the tournament along Nicola Delaney and Scott Leggett from Upper Hutt College and the rest of the teachers in charge of the Primary Schools who helped get the kids involved in what was a tremendous tournament.

Wilford School and Hutt Central School have been involved with the AFL KiwiKick Programme in the past with Sacred Heart School getting their first taste of the sport.

The Southern Zone team was a mix of students from each school as showed off their skills throughout their games and just missed out on becoming tournament champions as they were narrowly beaten by Wilford School who were unbeaten through the tournament.

AFL New Zealand would like to say a big thanks to Kath Delahunty from Sacred Heart Petone and Debbie Kowalczyk (Lower Hutt Southern Zone Coordinator) for the help in organising the tournament along with all the teachers in charge on the day.