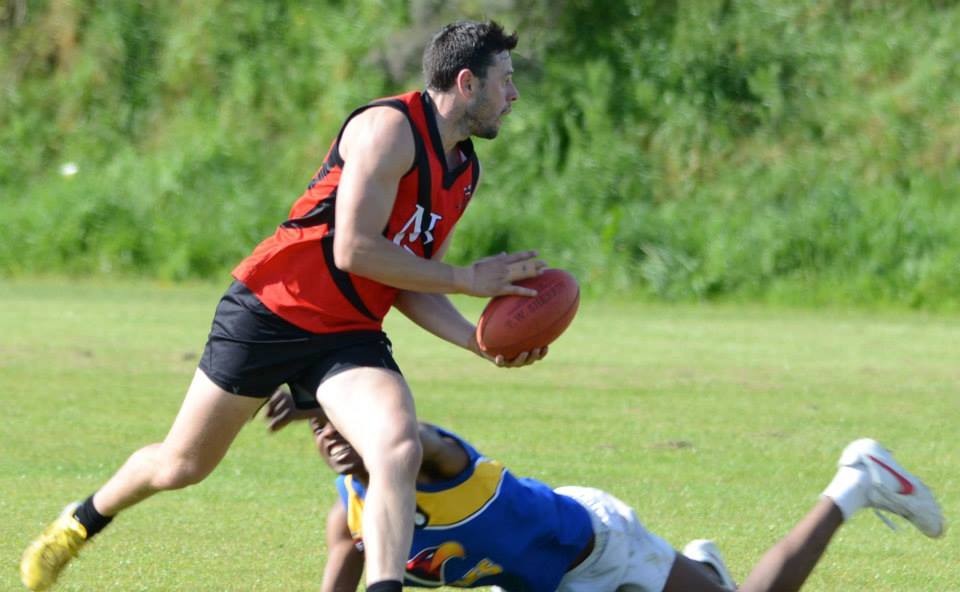 Another round of exciting Regional League matches have taken place, with thrilling close matches in Canterbury, dominant teams emerging in Auckland and young players stealing the show in Wellington.

The two CAFL matches on Saturday saw the two top teams fighting for position in the race to the Minor Premiership, and the two bottom teams scrapping hard to avoid the wooden spoon.

The Eagles and the University Cougars faced off in a match that will likely define the race to the bottom, with both teams fielding their strongest sides so far in the season. The Eagles were bolstered by former New Zealand Hawk Stan Chung, who primarily now plays in Wellington, though has a strong connection to the Eagles. He proved to be a decisive figure in the midfield, providing quality possession to the forwards, in particular to Richie Hazlewood who marked and converted throughout the match. The Eagles also welcomed back Isaac Firestone and Sam Wilson.

A strong start for the Eagles saw them build up a 19 point lead in the 1st quarter. However, de Joux and Swift were instrumental for the Cougars, dragging them back into the game through winning plenty of possession. By the start of the 4th quarter, the gap had narrowed to just 8 points. A pulsating final quarter ensued, with the Eagles dominating territory but unable to close the game out. Both teams acquitted themselves well over this quarter, with the Cougars fighting hard until the very end, and the Eagles managing to hang on for a 6 point victory. The final score was 10.11:71 – 10.5:65. The Eagles will be delighted that they are now very likely to contest the playoff match between 2nd and 3rd place, with the winner earning the right to play in the Grand Final.

At the other end of the table, the Bulldogs and the Blues met in a titanic clash, with both sides bolstered by returning players. Cam Bailey, part of the Senior New Zealand Hawks team ran out for the Blues, with Ash Smith, Alex Frew and Jonty Hall returning for the Bulldogs, Hall having returned from International duties with the U18 New Zealand Hawks.

The Blues managed to score a lead at half time, in part thanks to ill-discipline on the part of the Bulldogs. However, over the 3rd and 4th quarter the more Senior members of the Bulldogs stepped up, with Bailey, Dan Benny and Trent Sherlock putting in standout performances in the 3rd quarter to give their team the lead. A trickle of points became a flood in the 4th quarter, with the Bulldogs kicking 8 goals across the period to secure a the win, with the midfield of Van Gruting, Andrews and Smith earning much of the credit through their ability to win the ball and distribute to the forwards. The Bulldogs are now favourites to secure the Minor Premiership, though the Blues showed enough strength in this match to consider themselves contenders for the overall title.

Round 2 of the Wellington AFL saw impressive performances from young players in the AFL New Zealand High Performance programme, alongside some great match ups between club stalwarts.

The Hutt Valley Eagles took the highly regarded North City Demons by storm in the first match of the round, smashing the Demons in the first quarter to record an early 36 point lead. While the Demons fought hard in the next 2 quarters to remain in touch, a 4th quarter blowout saw the lead extended to a final score of 16.13:109 – 6.15:51 to the Eagles.

The match was notable for the performances of young players Alex Awatere, Connor McGeough, Sam Green and Nathan Lenihan. Lenihan in particular was impressive for the Eagles, kicking 6 goals in his first WAFL game of the season, having last week played for the U18 New Zealand Hawks. Other points of interest during the match included the ongoing tussle between James Kusel and Sam McKenzie, with both leading their teams from the front, and Tyler Tane winning the Player of the Day Award, thanks to Burger Fuel.

In the other match of the round, the Bulldogs held off a spirited challenge from the Saints. Leading the charge were Ryan McLean and Rob Murphy who kicked 7 goals between them. The Bulldogs pushed their lead out to 31 points by half time, and managed to hold onto their lead throughout. The final score was 12.15:87 – 11.8:74, with Jason Cox earning the Player of the Day Award. The match also saw the WAFL debut for Aidan Cheyne, previously of the North Shore Tigers.

The traditional powerhouses of the Auckland AFL stamped their authority on the competition this weekend, serving up comprehensive performances and sending strong signals leading into the 2nd half of the round robin competition.

The Waitakere Magpies stayed clear at the top of the table with a huge win over the Manurewa Raiders. While the Raiders have been making steady improvements across the season, they came up against a team that is quite simply one of the best seen in the AAFL. With the percentage boosting score of 21.9:135 – 2.3:15 in the bag, the Magpies look set to secure the Minor Premiership. The bright spot for the Raiders was winning the 3rd quarter, and with that a bonus point.

The Mt Roskill Saints moved up the ladder with a crushing win over the Pakuranga Panthers. The Saints, who have at times struggled this season, made no mistake in putting away the Panthers. The young Panthers were unable to move the ball through the midfield, and the Saints took full advantage, getting off to a flying start with Gray Samuels pushing the tempo early.

A major facet of the performance of Mt Roskill was in the improvement to their backline play, which has been shaky in previous matches this season. Matt Kemp, Michael Boyce, Tim Hollingsworth, Adam Booker and William Dickenson shut down everything that came their way, setting up attacking opportunities for the forwards in the process, with Aaron McConchie stepping up in the 2nd half with important spoils. The final score was 22.16:148 – 1.1:7, with Patrick Cleave scoring the solitary Panthers goal.

Dan Carman of the Saints, who kicked 6 goals across the match, lauded the performance of his team.

“(We can) give ourselves every chance to take this competition out. We are capable of pulling it off.” He went on to name Will Dickenson, Jessie Baty and Jeremy Freeman as the best on ground for the Saints. For the Panthers, Ben Hill held the line as the ruckman.

In the final match of the round, the University Blues lifted to beat the North Shore Tigers, in a match that will certainly dent the title hopes for the Tigers. They were unable to match the point scoring prowess of the Blues, failing to win any of the quarters. North Shore Tigers President Barry Rogers sought improvements from his players after the match, saying a lift in performances at key moments could have been decisive to the overall result. He named Mitch Ryan as the best on ground, playing in a floating halfback role. The final score was 11.15:81 – 5.5:35, with the Blues now in 2nd place on the competition ladder, having taken the spot from the Tigers.

Play AFL Clubs are starting in Auckland and Wellington next week, with kids taking part in AFL KiwiKick, and teenagers and adults playing social, non contact AFL 9s. This is a great chance for club players to get some extra skills and fitness training, and will also be an opportunity to recruit new players into Club teams. For more information, click here: 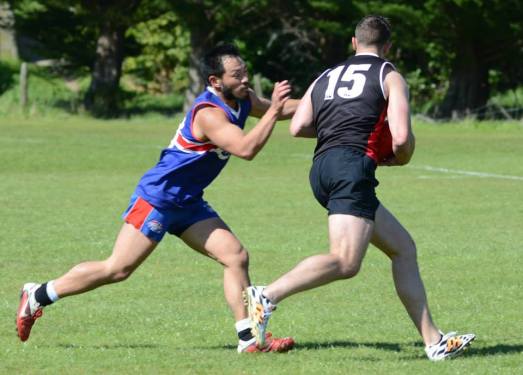 All photos by Margaret Lavery.