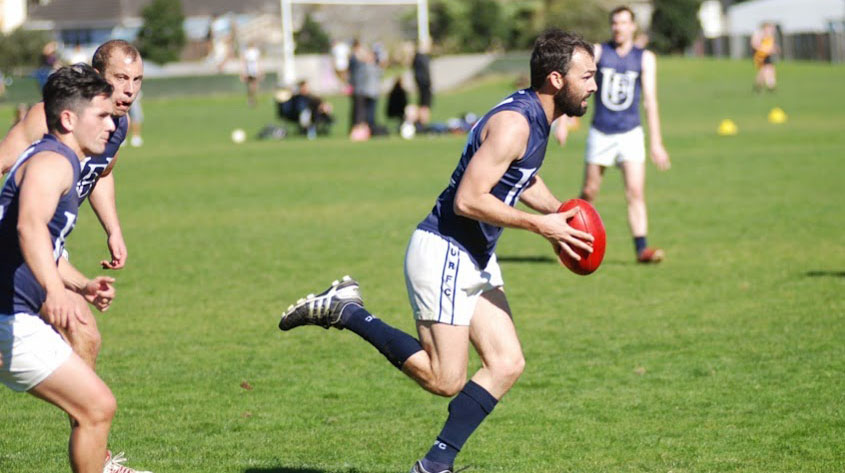 The Regional Leagues have continued through the AFL Grand Final Weekend and are now into the 2nd half of the season in Canterbury and Auckland. The Wellington AFL also began, with four clubs battling for regional supremacy.

Round 5 of the Canterbury AFL took place over Grand Final weekend, with the Eastern Blues and Christchurch Bulldogs looking assured of topping the ladder.

In the first game the University Cougars were overpowered by the Bulldogs, in a match characterised by the superior fitness and bench strength of the Bulldogs carrying the day. The Cougars can take heart from their performance, showing courage at the football, however need to be able to maintain their intensity throughout the whole match. The final score was 15.11:101 to 5.10:40

In the 2nd game of the round, the Blues enjoyed a victory margin of 99 points against the Eagles, though in a high scoring contest that saw 33 goals kicked across the match. Competitive up until half time, the Eagles ran out of steam, which allowed the Blues to run up a huge score across the 3rd and 4th quarters. New Zealand Hawks Dan Benny, Nick Fisher and Levi Inglis cashed in with multiple goals, and helped their team to a strong boost in percentages on the ladder, which will be useful coming into the later stages of the season.

Round 6 saw the two front runners secure another pair of wins. The Bulldogs beat the Eagles in a hard fought contest, in which the Eagles were able to match the Bulldogs for physicality, but not for fitness and skill. The score in that game was 15.20:110 – 6.5:41. In the other match the Blues thrashed the Cougars 17.17:119 – 2.8:20.

The next round will see the two matched teams play off against each other, in what will probably decide the shape of the ladder leading into the finals. A minor Premiership is potentially on the line for the Bulldogs or Blues, with the Cougars and Eagles looking to resurrect their seasons with a late run of wins.

In a top of the table clash, the Waitakere Magpies stamped their mark on the AAFL with a commanding win over the North Shore Tigers. The Magpies were accurate in front of goal, and won key moments in the match, with the Tigers scrappy and unable to maintain their momentum. The third quarter was where the match was won for the Magpies, keeping the Tigers scoreless. The final score was 13.9:87 – 6.13:49, with the Tigers clinging on to 2nd place on the ladder, in part thanks to earning 2 points through winning the 2nd and 4th quarters.

However, the University Blues are snapping at their heels, with a win over the 4th placed Mt Roskill Saints. In what has become a worrying trend for the Saints, they were unable to capitalise on a competitive start to the game, with the University Blues continuing to extend their lead throughout the match. The final score was 10.10:70 – 5.4:34. Matt Kemp, Sam McKenzie, William Dickenson and Jessie Baty were among the best for the Saints,

In the final match of the round, the Manurewa Raiders picked up their first win of the season in a tense and exciting match against the Pakuranga Panthers. With the lead swinging back and forth throughout the game, the Raiders eventually snuck home with a 9.12:66 – 7.7:49 win.

The Wellington AFL kicked off, with four teams competing for Regional supremacy across a 7 week competition. Following on from a successful Have a Go day on the 27 of September, the WAFL season began with the Eastern Bulldogs taking on a North City Demons side depleted through players and coaches on New Zealand Hawks duty. The Bulldogs ran away with a comfortable win, 10.11:71 – 2.6:18. In the other fixture, the Wellington Saints went down to a strong Hutt Valley Eagles team 13.22:100 – 5.6:36.

Play AFL Clubs are starting in Auckland and Wellington next week, with kids taking part in AFL KiwiKick, and teenagers and adults playing social, non contact AFL 9s. This is a great chance for club players to get some extra skills and fitness training, and will also be an opportunity to recruit new players into Club teams. For more information, click here: