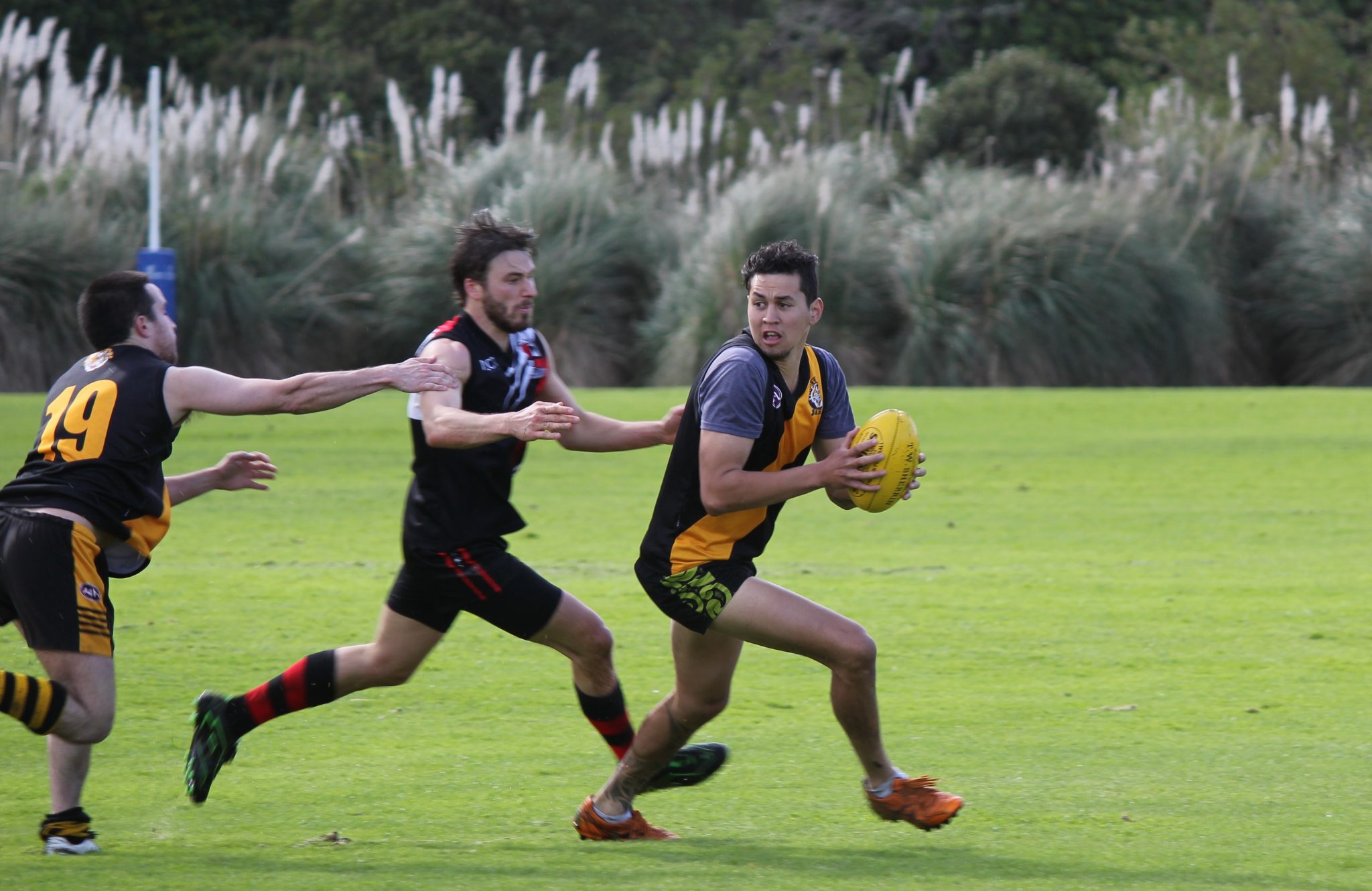 Round three of the Auckland and Canterbury Regional Leagues have taken place, with the points tables beginning to take shape.

In Canterbury, the Eastern Blues and the Christchurch Bulldogs reasserted their dominance over the rest of the competition.

The Blues put the University Cougars to the sword, running up a huge winning margin of 16.19:115 – 3.6:24. They now have two wins from three, and are looking like strong contenders for a finals berth.

The Bulldogs prevailed in a close match over the Ashburton Eagles, with the Eagles improving markedly from their 2nd round loss. The Bulldogs were too quick around the park, and able to defend their lead, to run out to a 9.15:69 – 8.3:51 win. Josh Robles of the Eagles again earned plaudits for his ferocious play.

The Bulldogs retain their top of the table position after the first round of matches, and appear to be the team to beat leading into the return fixtures.

In Auckland, the Manurewa Raiders were competitive in their loss to the University Blues. The Raiders were within touching distance of the Blues leading into the final quarter, before University heaped on the points late in the game to significantly improve their score percentage. The final score was 13.12:90 – 4.3:27.

The match of the round in Auckland took place between the North Shore Tigers and the Mt Roskill Saints, on a wet and windy day at Onepoto Domain. The highly fancied Saints went into the match as favourites, however early pressure from the Tigers saw them take a 3 goal early lead. Goals were traded leading up to half time, with the contest relatively even at that stage. Michael Boyce was tremendous for the Saints, cleaning up defensive messes repeatedly.

However, a phenomenal defensive effort from the Tigers in the 2nd half saw them concede only one point. North Shore President Barry Rogers nominated the entire backline as his Best on Ground, though in particular singled out the Sucu brothers, Andriu and Brandon, as key players.

“Mt Roskill has been one of the leading teams for the last few years and I doubt they would have gone 1 quarter without scoring a goal, let alone 2 quarters and nearly 3. This bodes well for the rest of the season for the Tigers.”

Barry Rogers also lauded the performances of Tyler Rakich and Mitch Ryan in the forwards, and Ty Smith and Sam Cumberpatch as distributors of the ball. Troy Brown led the scoring with 3 goals.

With 3 rounds completed, the Waitakere Magpies are clear leaders, after picking up a default win over Pakuranga. The Tigers, Saints and Blues have taken up the next three positions respectively on the table, though all are equal on two wins. The Raiders may be in last place, but there are promising signs at the club, suggesting that they will push up the table over the course of the season.

The AFL Grand Final Party Finder is back for another year, with events set to happen all around New Zealand and the world on the 27th of September. If you are hosting an event for the AFL Grand Final, make sure you enter the details here: http://www.afl.com.au/tv-radio/overseas-gf-party-finder