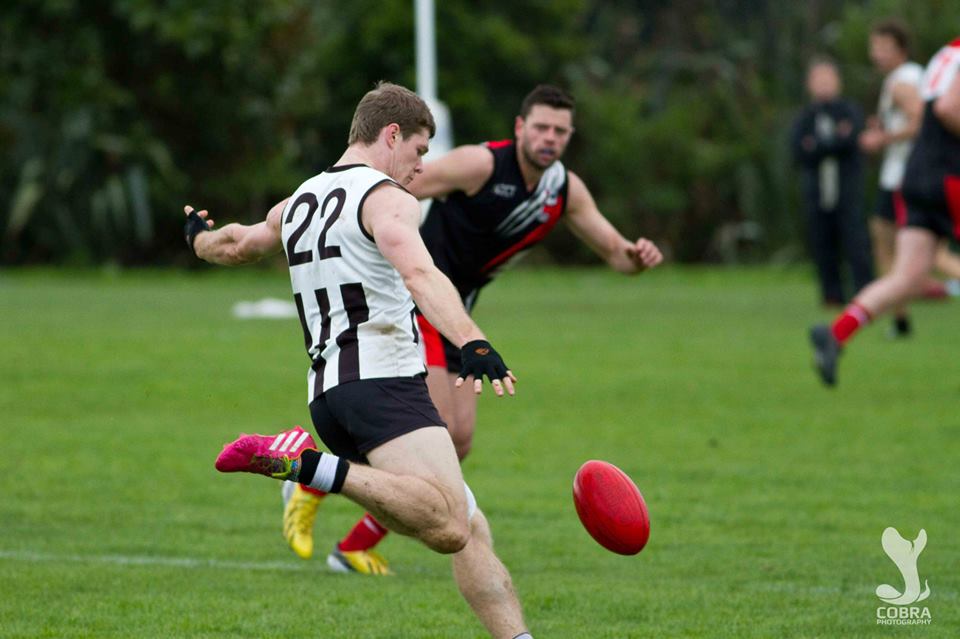 The 4th round of the Regional Leagues saw upset wins creating congested points tables, leaving all to play for over the next set of matches.

Wet weather hampered play in Auckland, with the rare situation of a match being postponed due to ground closures. University and Pakuranga will reschedule their match and play it at a later date.

North Shore Tigers continued their ominous march up the ladder, with a thumping win over the Manurewa Raiders. The Tigers were led by the Rice brothers, Adam and Xavier, who owned the midfield and provided quality possession to the forwards. Not only did the strong defensive work from the Tigers continue from last week, their attack also fired, raining goals throughout the match. Troy Brown and Tyler Rakich led the scoring with 3 goals each, along with the young Northlander Te Kopa Tipene-Thomas who kicked two. Former New Zealand Hawks player, and 2005 International Cup winner Todd Danks rolled back the years with a strong comeback performance. Club President Barry Rogers lauded the efforts of Sam Cumberpatch, Justin du Toit, Noorer Packer and Grant Conway. The final score was 15.13: 103 -1.2:10.

The match of the round took place between last year’s finalists, the Mt Roskill Saints and the Waitakere Magpies. Going into the match, the Magpies were unbeaten, while the Saints were coming off a demoralising loss against the North Shore Tigers. However, in a surprising turnaround, it was the Saints who managed to sneak a win in the wet weather, after a gripping final 5 minutes. Despite winning three of the quarters, the Magpies were unable to close out the match, meaning there are now no unbeaten teams in the AAFL. The final score was 6.8:44 – 7.3:45, with Waitakere’s inaccuracy in front of goal costing them dearly.

Going into Round 5, the key fixture will be the North Shore Tigers vs the Waitakere Magpies. A win to the Tigers will show they are genuine Premiership contenders, while a win for the Magpies will show that their loss against Mt Roskill was only a minor blip.

This round will take place in two weeks, with a break for the AFL Grand Final next week.

In Canterbury, the Ashburton Eagles took on the University Cougars, in what was one of the best games of the Canterbury AFL this season. While the Cougars were winless going into the match, they came out determined to fix that against the Eagles. A close first half ensued, with only one point separating the teams. However over the 3rd quarter the Cougars increased the tempo of the games, and caught the Eagles exposed defensively. A late struggle from the Eagles proved to be not enough, and in the end they were a solitary goal behind at the final siren.

The best players for the Eagles were nominated as S Carden, Hazelwood, Williamson and once again Josh Robles. For the Cougars, McKenzie, de Joux, Cardilini and Swift earned plaudits. Jonty Kay was also recognised for his accuracy in front of goal. The final score was 12.10:82 – 11.10:76.

The best players for the Bulldogs were nominated as Todd Andrews, Stephen van Gruting and Tristan Woodward. For the Blues, the best were Sherlock, Bahe, and current NZ Hawks representatives Cam Lubransky and Jared Court. The final score was 16.9:105 – 15.6:96.

Grand Final events will be taking place around the country, with Sommet Sports showing full live coverage of the match. If you are hosting an event, please upload the details into the AFL Grand Final Party Finder, to spread the word about the biggest day in the AFL calendar.