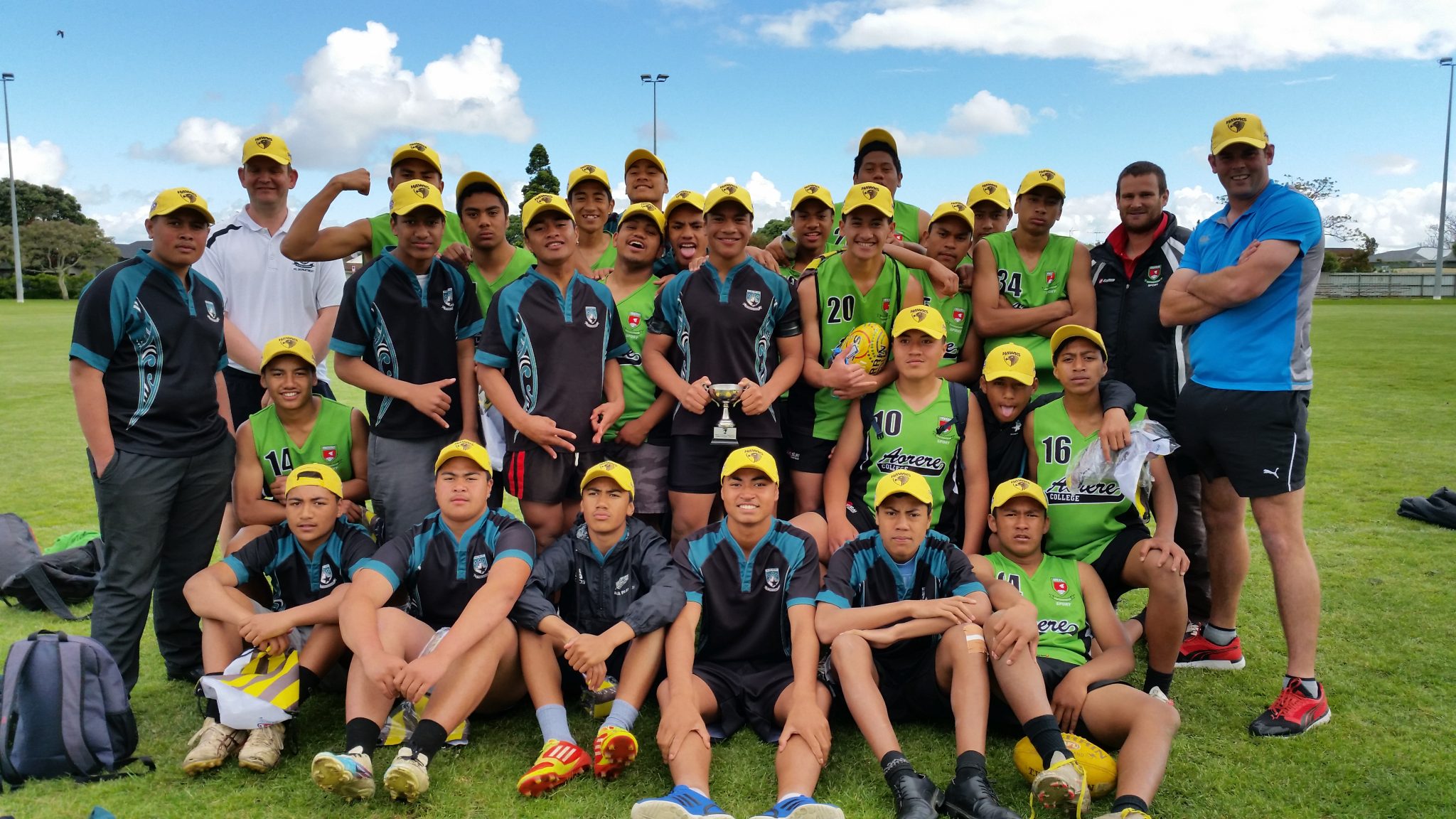 The AFL skill of Southern Cross Campus was on full display after a powerful performance in the 2014 Junior Hawks Cup Counties Cluster.

In a high scoring match, with both teams playing hard running football, Aorere College were unable to maintain the pace set by Southern Cross Campus in the match played at the Papatoetoe Sports Centre.

The game began with a goal to Fiohiva Faingaia of Aorere College, however that was as good as the first quarter got for them. Eddie Aka led from the front for Southern Cross, kicking them back into the lead. Southern Cross went into the first break with the 3.4:22 – 1.2:8 advantage.

Wind was expected to be a major consideration for both teams, however over the 2nd quarter Southern Cross proved they were capable of kicking points into the wind. In this quarter they managed to dramatically increase their lead, partly through exceptional defensive work and partly through the boot of Kahoi Togiou, who kicked 5 of the 8 goals recorded by his team during the period.

The goal of the game came in this quarter, with Togiou converting a superb sequence of teamwork and marking set up by Sam Lauhinoa. At half time Aorere College trailed 2.5:17 – 11.8:74.

The third quarter saw Southern Cross retain the wind and take full advantage, kicking a further 6 goals. Aorere offered resistance, and Jason Patuki managed to kick a goal into the wind, but by now Southern Cross were stamping their authority on the match. With one quarter to play the score was 17.13:115 – 3.6:24.

A better defensive effort from Aorere kept the score down in the 4th quarter, preventing a blowout. Togiou continued to score for Southern Cross. Natu Faitili also got on the scoresheet for Southern Cross, along with Sam Lauhinoa. A goal to Jokanah Vaotuua and 4 behinds was the response from Aorere, who fought hard throughout the match but eventually went down 20.20:140 – 4.10:34.

Goals were also scored through the match by Southern Cross players Fossie Unase and Asipeli Manisela, along with Aorere College player Tevvell Sala.

Some of the players invited will include those who received awards for Best on Ground. For Aorere College, that honour went to Jokanah Vaotuua. Elijah Atanoa was judged Best on Ground for Southern Cross.

Hawthorn Hawks Football Club representative Greg Boxall presented the overall Best on Ground award for the match to Kahoi Togiou, which capped of a remarkable day for the young man in which he kicked 9 goals.

For both teams, attention will now turn to the North Island Championships, to be played at the Trusts Arena on the 15th and 16th of November. Southern Cross will be looking to improve on their efforts last year, in which they came 2nd against a strong field of teams.