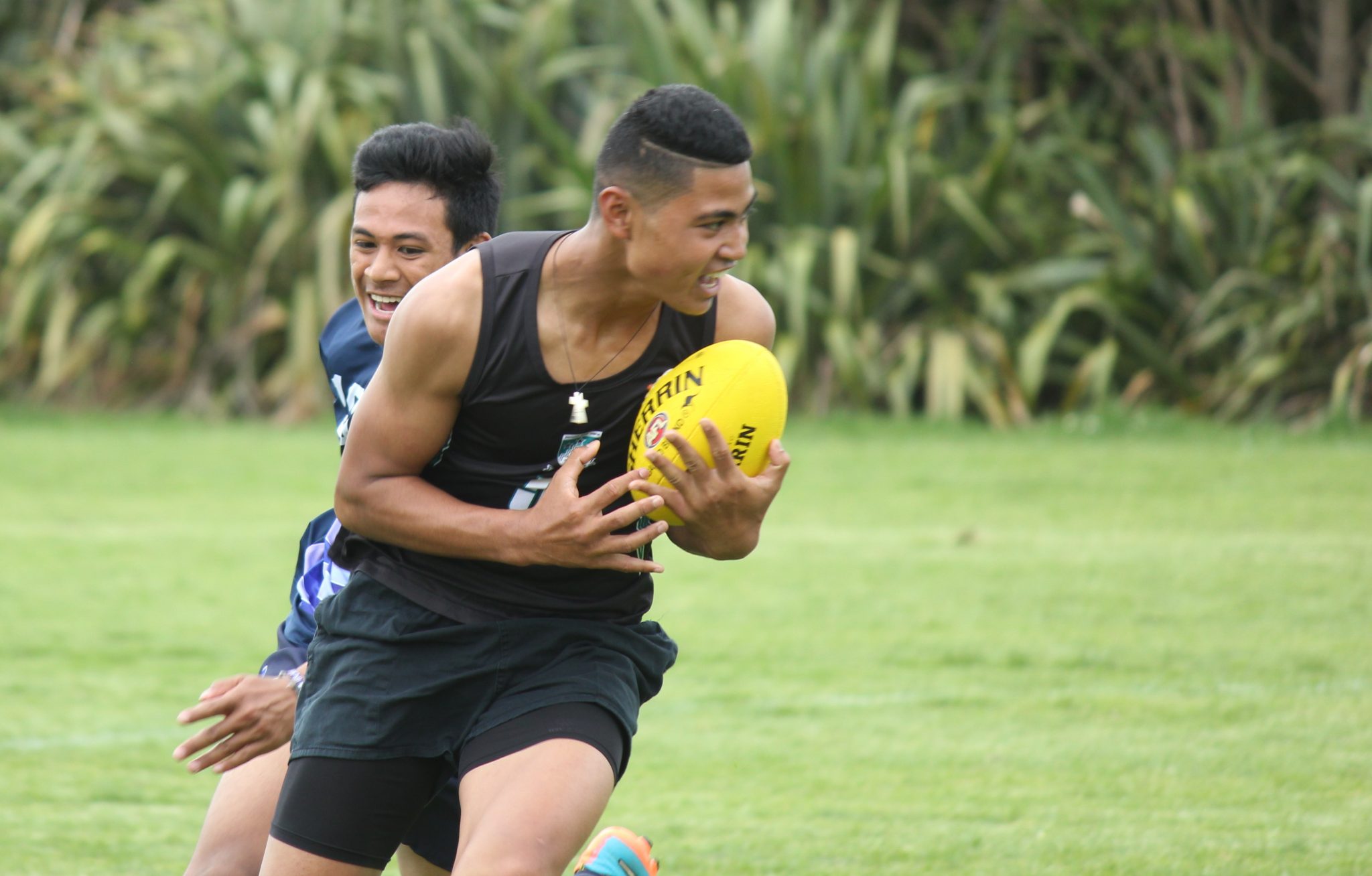 The AFL North Island Junior Secondary School Championships have been taken out by Southern Cross Campus, who showed their class across the fiercely contested tournament.

With seven schools competing, including the winners of five Regional Cluster Tournaments, the competition saw a high standard of play.

Daniel King, the Head of P.E. from Southern Cross Campus, lauded the work his whole school had put towards the competition win.

“It’s been a long process, we’ve been here about 5 or 6 years, ever since its been running and always been close. The older boys, the ones now in Year 13 encourage the younger ones to do it and support them. There’s a culture at Southern Cross where AFL is a successful sport and gives the boys an opportunity to do well, and the kids get a lot of rewards from that. The school is very supportive so credit for them for the time and effort they put in.”

For Southern Cross, the victory was an improvement on their efforts in the 2013 competition, where they placed 2nd behind One Tree Hill College.

Southern Cross’ win was build on a solid foundation of sound and steady defence, which gave the forwards confidence to play attacking football.

The competition was split into two pools, with one playing longer matches to compensate for playing fewer games. Lining up in pool A were Aorere College, Waitakere College, St Paul’s College and Northcote College. In Pool B, Southern Cross Campus were joined by Kerikeri High School and One Tree Hill College.

The tournament began with huge wins to Southern Cross campus over their two opponents, clinically running up big scores through clever and focused play. Kerikeri High School provided a challenge to them, kicking five goals, but weren’t able to hold back the tide on defence.

The final match of Pool B saw Kerikeri High School demolish One Tree Hill College, with their defence in particular so tight that they did not concede a single goal.

The next rounds of Pool A saw three extremely close matches. First up Northcote College dug deep to snatch a win from Aorere College by a single point. The next match saw Waitakere College just managing to turn their fewer number of goals into a 3 point win against St Paul’s College, thanks to a large tally of behinds.

Another close match followed with Waitakere College managing to kick a goal right on the siren to win by two points over Northcote College, and with that secure a place in the final. The last match of the group saw St Paul’s take 2nd place thanks to a strong win over Aorere College.

For the finals, each team played their opposite seed, with the 2nd and 3rd ranked teams playing first. Northcote College secured 5th place with a hard fought win over One Tree Hill College, while St Paul’s College earned the 3rd place in the competition with a win over Kerikeri High School.

The final of the competition was played between the winners of the Counties and Waitakere Hawks Cup regional cluster tournaments. Southern Cross Campus proved to be far too strong for Waitakere College, running out to a 9.9:63 – 1.1:7 victory. Southern Cross took advantage of the wind in the first half, before negating any chance for Waitakere to get back into the match through clever midfield play while pushing into the wind.

The overall Player of the Tournament was Sam Lauhingoa from Southern Cross, who was also a key figure in the Counties Junior Hawks Cup cluster tournament.

The AFL Junior Secondary School North Island Championships were made possible in part through the work of teachers at competing schools, and the efforts of volunteers from local clubs who play in the the Auckland AFL competition.

Volunteers from various local AFL clubs were also in attendance, with Noora Packer and Justin du Toit from the North Shore Tigers and Josh Copeland from the Waitakere Magpies assisting. For umpires, the tournament was well served by Mark Andrews and George Hauiti from the Auckland AFL.

“I think that’s our strength, that we expose the sport to the whole school through P.E, and from that we get the best kids.”