The Magpies swoop on the Bulldogs to take game 2 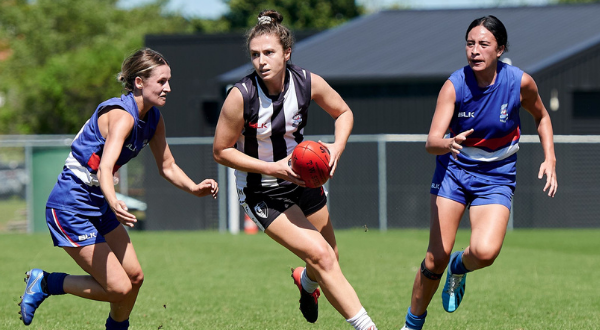 A stunning second half comeback has seen the Magpies win game 2 of the Women’s Premiership by 10 points at North Harbour Stadium.

The Bulldogs were the ones to start strong as they dominated the game early. Kristin Farrell kicked the first goal of the game, which was quickly followed up by a terrific running goal from Emma Collins.

Sam Bramwell was strong early on in the midfield and backed up her form from game 1 with another impressive display.

The second quarter was tight as both sides defence stood tall. For the Magpies, Valentina Serrano and Buell Verkade ran the footy out from their defensive line. Young Ruby Larcombe from Christchurch was a star in defence for the Bulldogs.

Trailling by 2 goals at halftime, the Magpies came out in the second half and produced some great attacking footy.

Luzette Hermon and Sam Lightfoot kicked a goal each in the third term to level the scores, while Chloe Rahui-Durkin from Wellington was playing a key role in the midfield.

The Magpies held a 4 point lead at the final change as they continued their attack in the last quarter.

Caitlin Olsen was dominating the ruck contest and Luzette Hermon sealed the win with 2 superb goals late in the game.

The Grand Final will be contested on April 18th at North Harbour Stadium.

Caitlin Olsen was superb for the Magpies in the ruck and around the ground. From Wellington, Caitlin played aggressive footy and was hard at the contest.

Luzette Hermon was the difference on the scoreboard. Hermon kicked 3 second half goals to help the Magpies claim victory.

Heather Feetham was phenomenal for the Bulldogs in game 2. The midfielder was everywhere throughout the game and managed a high number of disposals.

“We changed our set up at half time and moved a few players into difereent positions, and it seemed to have paid off.” Peter Geale, Magpies Head Coach.

“The Magpies were terrific in the second half and deserved the victory. Our team left everything out on the field and couldn’t be more proud of the squad today.” Bulldogs Head Coach, Mick Coultard.