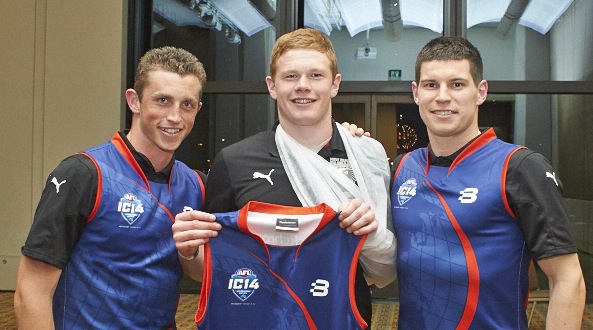 Three New Zealanders have been named in the AFL International Cup World Team.

As a testament to their performances over the tournament, Andrew Howison, Ben Miller and Aaron Harris were all named in the 22 strong team.

The selection was made through umpire votes, official team votes and the views of the AFL Selection Panel.

The three New Zealanders selected have all had outstanding tournaments, regularly featured among the Best and Fairest nominations.

Andrew Howison has been an inspirational captain for the New Zealand Hawks, and kicked their final point of the tournament, a behind that got the team over the line in their third place playoff against South Africa.

Ben Miller was a menace to opposition teams, brutally disrupting attacks and then moving the ball forward with powerful runs and astute kicks. He showed courage in the match against South Africa, playing the 2nd half at full intensity despite breaking his collarbone during the match.

Aaron Harris was a go to man for the New Zealand Hawks throughout the tournament, and stood up when it mattered, winning Best and Fairest nominations in the hard fought wins over South Africa and the USA.