Tigers lock in home semi with win over Magpies 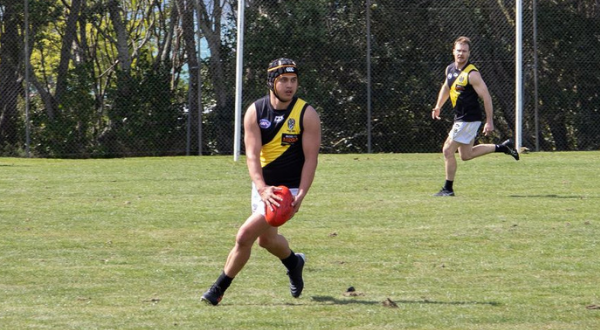 The North Shore Tigers have locked in a home semi final after defeating the Waitakere Magpies on Wednesday night.

In the remaining round 8 games, the Mt Roskill Saints defeated the Manurewa Raiders while the Uni Blues held on to beat the Howick Hornets by 4 points.

Mid week footy threw up a mouth watering clash with the top of the table North Shore Tigers looking to get the win over an in-form Waitakere side.

The side last met in the first round where the Tigers easily accounted for the Magpies with a 51-point victory.

This was an important game for both sides in the lead up to the semi finals.

The intensity levels were high from the opening bounce with both sides applying physical pressure in an effort to win the ball.

Tigers Ruckman Robert Harris continued his good form setting up the midfield of Ben Armstrong, Dale Johnson & Josh Cunliffe. The Tigers took control early with four unanswered goals while only conceding one in the first quarter.

The pressure from the Tigers continued into the second as their delivery into the forward 50 was unmatched. Mitch Ryan and Justin du Toit controlled the battle in the air.

The Tigers backline also held strong throughout with best on ground Taylor Potter leading the charge. Xavier Bryham and Xavier Rice supported well, covering huge distances to turn defense into attack. By half time, the Tigers had added another 4 goals to go into the break ahead by 6 goals.

The Magpies made some changes in an effort to stem the flow of goals in the second half while the Tigers were looking to shut the game out. Mitch Ryan continued to be strong in the air but it was the ongoing work rate of the Tigers midfield that saw them able to lock the ball up and slow the game down.

First year player Morgan Huggins was strong on the ball all game and managed to kick a couple of goals himself.

NZ Premiership player Troy Brown was solid playing in an unfamiliar role off half back towards the end of the game. His skill on the loose ball and in the air were obvious as each magpie attack was contained.

The Magpies were able to kick a couple of late goals to make the score line look a little friendlier but the Tigers will be happy with their 3 goal win as finals approach.

“Very proud of the boys today. It’s never easy against the Magpies but we were able to kick away early and never looked back. Our current team is a great mix of experienced and first year players that are making an impact. We’ve recruited some great young players that have been able to fill some of the gaps left in our roster from last season. With some key players still to return we feel like we are in a really good place heading into finals.”
Dan Pearce – Captain North Shore Tigers

Manurewa travelled to May Road for a mid week game as they came up against the Saints.

After a slow start from the Raiders in the first, the key was getting back to basics and moving the ball around the ground through good skills. Junior Fangana was playing well in the middle early on.

With Roskill on form and kicking multiple goals in a row, things had to change for the Raiders and it did.

The tempo was lifted from the Raiders who took it to Roskill for the next 3 quarters and although the scoreline didn’t suggest it, it was a different outfit than how the team started.

With one game to go for 2020, the Raiders are looking forward to finish one of their better seasons off with a strong performance at home versus the Magpies.

“Cheers Roskill for hosting us mid-week. We started slow in the first quarter which had us behind the 8 ball. But proud of the fight back and looking forward to one last hit out at home on Sunday.” Jordan Thompson, Manurewa.

It was a perfect evening for running, highly skilled football but neither team could properly execute in what was a scrappy and highly competitive game.

Howick were attacking hard in the first term but they couldn’t convert early on missing a number of opportunities in front of goal.

University managed to control the middle of the ground through Tim Stokes and Reed Cathcart in the first half and got plenty of ball forward without conversion.

Howick stopped applying the pressure in the second and let Uni take charge. Lachlan Salmon was best once again for the Blues.

Howick got the jump on a tiring Uni squad in the third quarter. Ken Rowe had a strong quarter making strong leads and took some important marks in the forward line. They kicked a couple of goals to shorten the gap to just 2 goals at three quarter time.

In the final quarter, the Hornets were dominant and clinical as they kicked a couple of goals to get within 4 points of the Blues. Brodyn Bevan must have been working out his legs bombing 2 long range goals from near the 50. But that scored remained the same as Uni took the 4 points.

Great forward delivery by Steph Tabaillou, Carlos Tarawhiti in his second game played superbly kicking his first goal and also a clinical pass that led to a second.

“Always a tough ask against Howick and the midweek game allowed for a new experience – hopefully something we can continue in the league moving forward.” Chris Mundell, University Head Coach.

“We lost to Uni in a similar round last year by 1 goal and to come back this year after a rough few games and to put on that performance I am very proud of the team. We took the game right to the end and unfortunately lost our composure in the last 2 minutes and were unable seal the victory.” Ryan White, Howick.