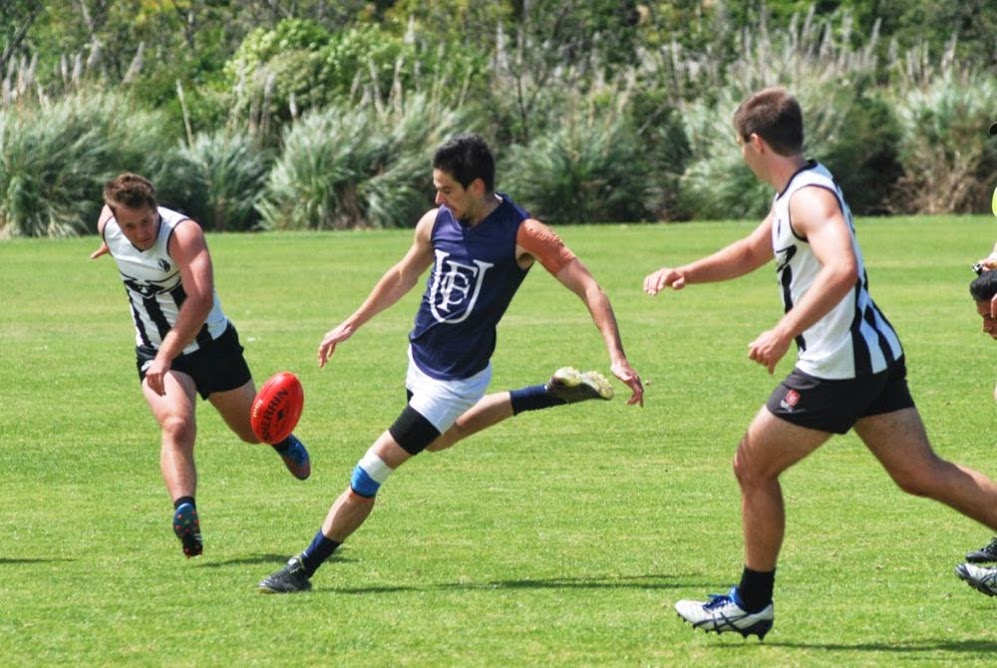 The University Blues have won the 2014 Auckland AFL, narrowly defeating the Waitakere Magpies in a match with a thrilling final quarter.

The match pitted two contrasting styles against each other, with the structured and focused game-plan of the Blues trumping the adventurous Magpies.

University captain Chris Mundell paid tribute to the Magpies, who came so close to pulling off what had previously appeared to be an impossible victory.

“It was probably the best final I’ve been part of. Waitakere brought it right to the end.”

Earlier in the AAFL Finals Day at Onepoto Domain, the North Shore Tigers thrashed the Mt Roskill Saints to secure third place for the season.

Throughout the match, a University win appeared to become more likely with every quarter. A tight opening tussle gave the Blues a modest lead of 1 goal at quarter time.

University kicked the first goal of the match, before the Magpies applied sustained pressure that led to a goal in reply. The teams traded another goal each, and with a deadlock at the first break looking likely, Nick Trask stepped forward for the Blues, taking an outrageous diving mark in front of goal and converting the set shot. 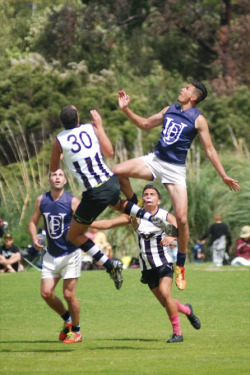 A noticeable aspect of the match was the strong performances of young players on both teams. Teenagers Carlos Donnell-Brown and Josh Copeland both stood up for the Magpies, with Donnell-Brown in particular marking and distributing skilfully. For the Blues, young AFL International Scholarship holders Siope Ngata and Giovanni Mountain Silbery both played with power and presence.

The third quarter of finals is known as the Premiership quarter, and so it proved to be in this match. Waitakere scored first after the half time break, threatening to retake the lead. However, that was as good as it got for them over that quarter, with the Blues grinding out four more goals. Clever possession based play was the key, with the Magpies seeing little of the ball. The lead looked insurmountable at three quarter time, with the Blues leading 9.6:60 – 5.2:32.

However, there is no team in New Zealand more capable of a last ditch fightback than the Waitakere Magpies, and they gave their all in their bid to hold onto the Auckland AFL title.

An all-New Zealand representative midfield of Shane Leat, David Rattenbury, and Will and Michael Gregson took full control of the ball in the 4th quarter, rapidly moving it back into attacking zones. Dusan Hakaraia scored the first goal of the quarter for the Magpies, continuing his final quarter heroics from the semi final.

University hit back quickly, appearing to kill off any chances of a fightback. But another Hakaraia goal kept the momentum going for the Magpies.

Trask kicked his 5th goal of the match to keep the Blues firmly in the lead, but by now the Magpies were dominating the match. A goal to David Rattenbury, followed by two more in quick succession, saw the Magpies trailing by just 9 points.

With just minutes remaining in the match, Hakaraia scored again to spark the vocal Magpies fans into life, who sensed a boilover was about to take place. Immediately after the ruck to restart the match, the Magpies moved the ball back into their attacking zone. Desperate scrambling defence from the Blues prevented a goal, with a wild clearance sending the ball out to the wing. The siren sounded, and the Blues had hung on for the narrowest of victories.

The loss was tough for the Waitakere Magpies, who had to give up the Auckland AFL Shield after taking it against the Mt Roskill Saints in 2013.

For the University Blues, the win meant a return of the Shield that they had not held since 2011, after being a powerhouse earlier in their history. Chris Mundell credited a two year campaign to win back the Premiership as the key to their success.

“80-90% of the players who are here today came in last year. We’ve rebuilt our club after a couple of tough years, and built a culture we can be proud of.”

Many of the players will now be looking forward to the National Provincial Championships, to be held in Wellington on the 6th and 7th of December. Auckland are the current Champions of New Zealand, and their tournament squad features especially strong contingents of University Blues and Waitakere Magpies players. 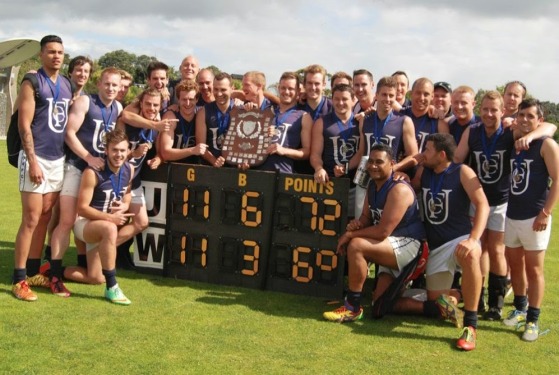