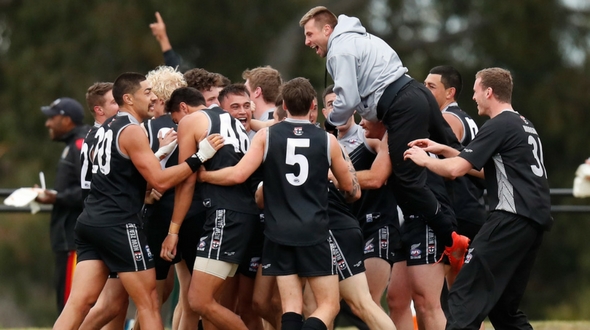 Miller, one of two Saints playing with New Zealand during the two-week tournament alongside Joe Baker-Thomas, broke Ireland hearts by converting a free-kick to snatch victory from the jaws of defeat.

The goal put an end to Ireland’s campaign, ensuring Papua New Guinea advanced to a Grand Final clash against the Kiwis on Saturday.

Miller and Baker-Thomas will get their first chance to play on the hallowed turf of the MCG, with the championship decider to be played as a curtain raiser to the Collingwood vs Geelong Round 22 clash.

The pair’s presence in the Kiwi line-up isn’t the only connection the team has with St Kilda, with the famous Saints emblem also adorning their uniforms.

The emblem symbolises St Kilda’s support for football in New Zealand which centres around a partnership between AFLNZ, the Saints, and the club’s major sponsor in AV Jennings.

After playing three matches in Wellington during the 2013, 2014 and 2015 seasons, the Saints returned the favourlast week by hosting the Kiwi’s clash with Fiji at the Linen House Centre in Seaford.

Barclay, an 195cm key-position prospect, joined St Kilda on an international scholarship in 2015 after being spotted by recruiting guru John Beveridge at a basketball tournament.

This year, the 18-year-old has split his time between the TAC Cup, the VFL and the VFL Development League, with Sandringham Dragons and the Sandringham Zebras respectively.

The youngster has regularly impressed in defence with his agility and athleticism but has made his mark as a forward in the International Cup.

Barclay is one of four players born in New Zealand on the Saints list, including Baker-Thomas and senior listed players Rowan Marshall and Shane Savage, who were both born across the ditch.

St Kilda Chief Operating Officer Ameet Bains said the club continued to strengthen its ties with New Zealand football and hoped to return to play home-and-away matches in the future.

“We are really proud with the work we have done with AFL New Zealand and AV Jennings to develop AFL KiwiKick (similar to Auskick) and a program to encourage school-based participation,” Bains said.

“We continue to plan for the return of matches in New Zealand, ideally as early as 2019 with Auckland the preferred destination.”